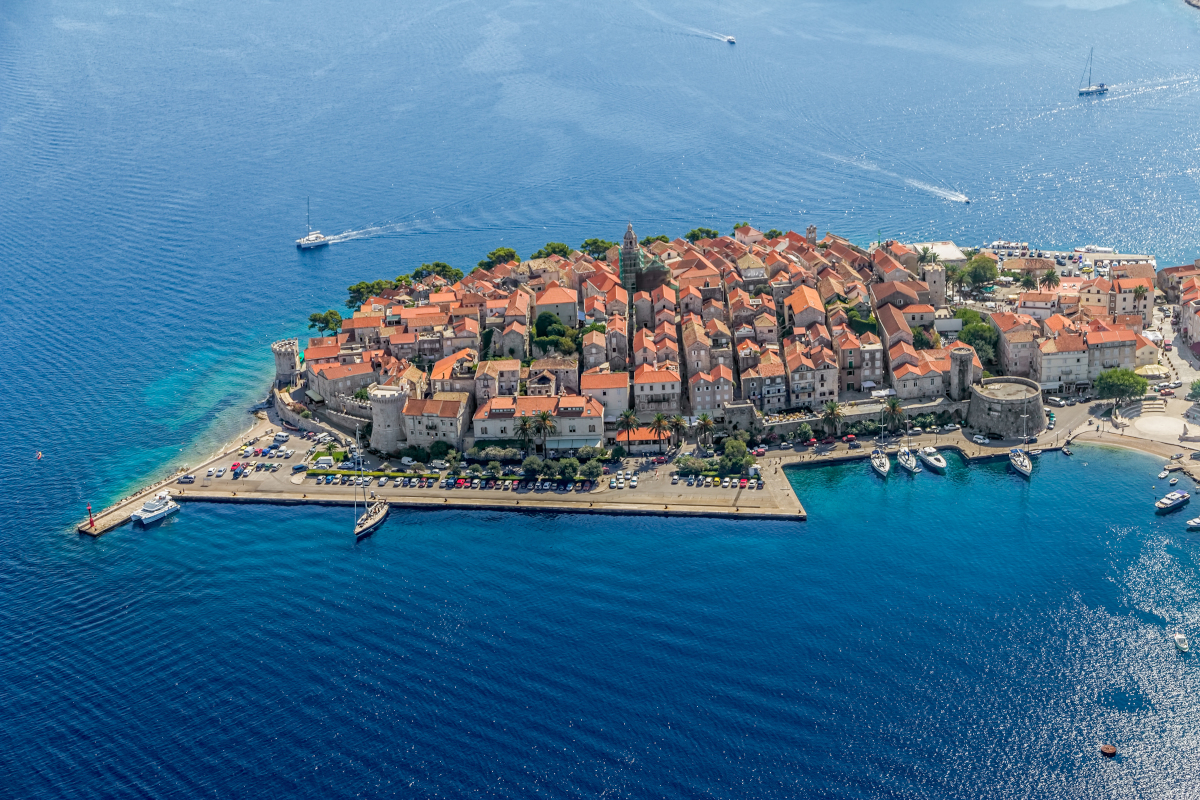 South Adriatic sailing route includes TOP islands and places which are a must-visit. You can visit the famous little medieval and ancient towns, enjoy in local cuisine and during the day swim in crystal clear bays.

The city is famous for its beaches and the great fortified palace at its center. The Palace was built by the Roman emperor Diocletian. It is a perfect place to start Your sailing vacation. In the area 50 km around Split, you can charter a yacht and sail out from six nautical marinas. Basically, you can find and rent any vessel: sailboat, sail or power catamaran, small motorboat or luxury motor yacht, gulet, or luxury motorsailer.

Bobovišća is located on the west coast of the island of Brač in a beautiful bay that separates into the port of Bobovišća and Vičja luka . The Bobovišća anchorage attracts sailors due to its great natural protection. The Vičja luka is known as the site of Illyrian-Greek civilization. The stone waterfront in the port of Bobovišća is harmoniously surrounded by stone houses, the most notable of which is the house of the Gligo family from the 18th century, converted into a summer house.

Close to Bobovišća is the old fisherman village, Milna,  on the northwest side of the island of Brač. The welcoming bays of Milna have always been a favorite port for sailors in the Adriatic. Milna is beautiful and the safest harbor of Brač. There are two very well-equipped marinas  – ACI Marina Milna and Marina Vlaška.

Milna is adorned with a long and beautiful coastline lined with stone houses, small masterpieces of folk architecture. The village captivates its guests with healthy Mediterranean cuisine that is rich in fresh fish, top-quality olive oil, and local wines. 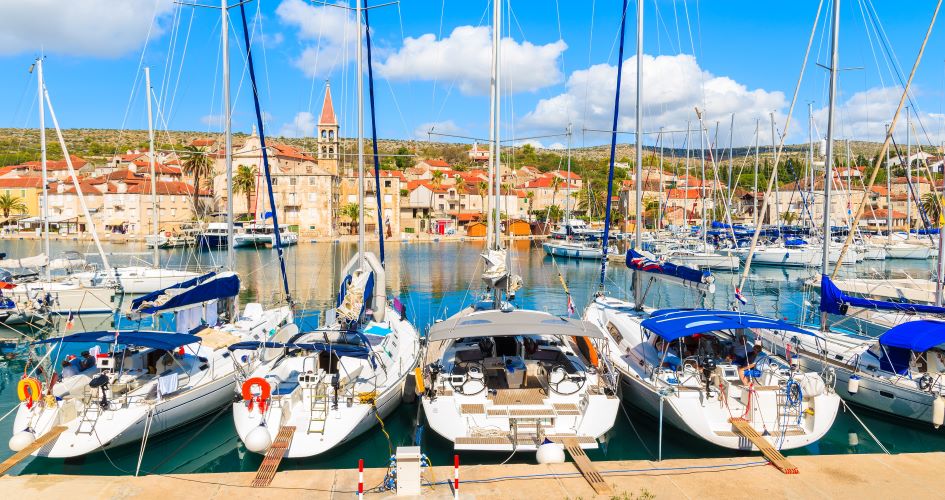 Hvar town is situated in the middle of the south side of the island of Hvar. It is an ancient city of rich history, culture, architecture, and beautiful nature. “The St Tropez of Croatia”, Hvar Town is impossibly chic. Hvar is an island of elegance, culture, nightlife, fine dining, clear and clean sea, a place that simply must be visited.

On the nearby Pakleni Islands, you can find your oasis of peace in ACI Marina Palmižana or one of the anchorages.  If you stay in Palmižana, the best way to get to the town of Hvar is to take a taxi boat. 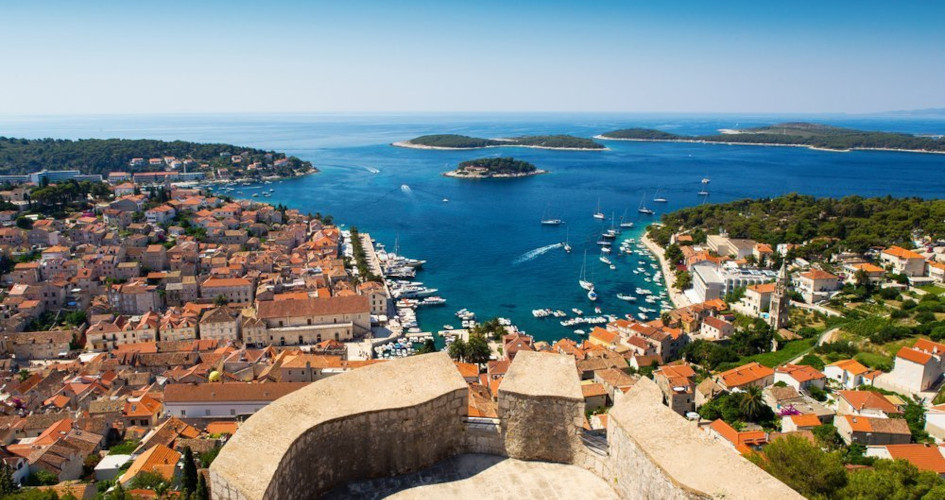 On the way to Korčula, you`ll sail through the Pelješac channel, a narrow channel that lies between the Pelješac peninsula and Korčula offers a great sailing experience. The channel is famous among windsurfers and kitesurfers throughout the world due to the local northwesterly wind, called Maestral, which appears in the channel mainly during the summer season.

The synonim for Korčula old town is  “Little Dubrovnik.” This coastal citadel is dripping with history, with Medieval walls, marble streets, and a rich gastronomic scene. Tourist’s favorite hidden stop in south Adriatic. The city’s greatest attraction is the house belonging to the Polo family in which, according to legend, was born in 1254. Marko Polo – a Venetian writer, trader, and researcher.

You can stay in the ACI marina Korčula or anchor in one of the nearby bays. 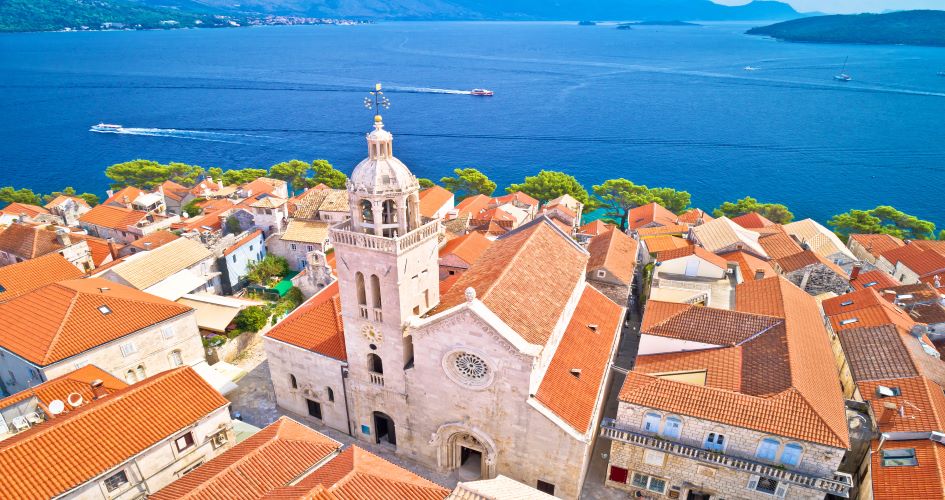 This island is called The island of bright stars. Lastovo is the most remote inhabited Croatian island, far from many typical sailing routes. Lastovo is a Nature Park where You can be alone and experience complete privacy. There are several smaller islands around Lastovo which you can reach only by boat.

Because of its beautiful bays, pristine shores, and lush vegetation, it is an ideal destination for seafarers. There are several small ports and coastal villages on the island: Pasadur, Ubli, Lučica, Skrivena Luka, Zaklopatica. The safest anchorage bays are Skrivena Luka on the south side, Velo Lago on the west, and Zaklopatica on the north of the island. 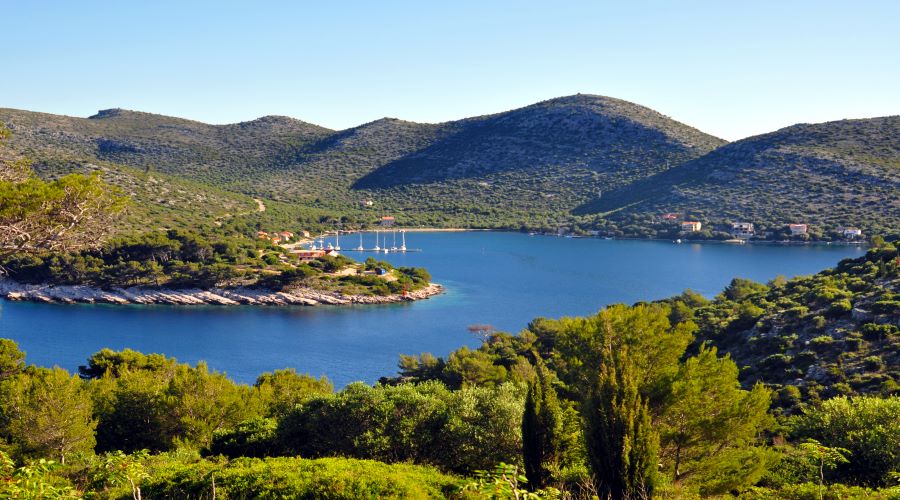 On the top of the list of the Croatian less known gems is the island of Vis. A place where life is simple, relaxed, and beautiful.

Vis Town is on the northeastern part of the island of Vis at the bottom of the deep-drawn and well-protected cove. It is one of the most famous sailing destinations on the Adriatic.

Traditional local dishes you can try in dozens of restaurants in the city or taverns, within the rural households around the city. Don`t miss tasting the local specialties of Vis bread and cake and pilchards from the grill.

Mountain climbing, cycling, or diving are available for active holiday lovers on the island of Vis. Especially popular on the island are military tours. The island had a role of a military base in former socialist Yugoslavia. Today, there are many remains, tunnels, and bunkers, open for visitors. 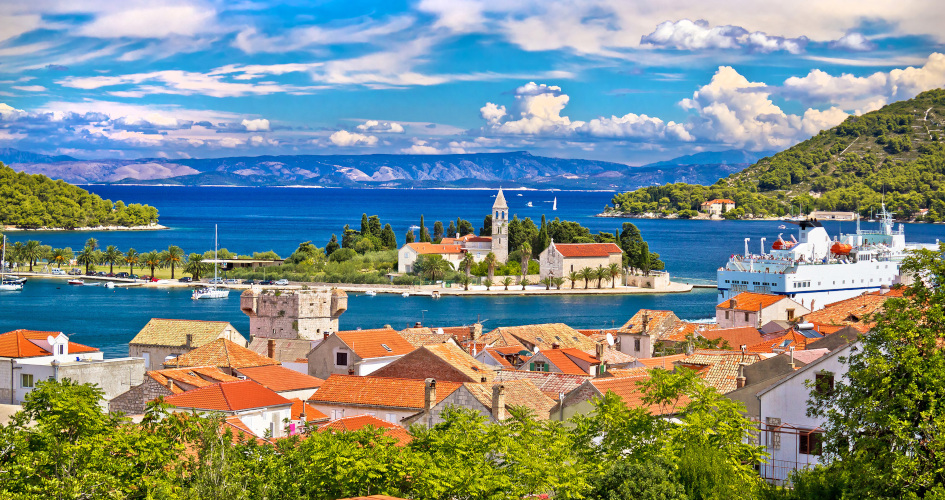 Maslinica is the only settlement on the west coast of the island of Šolta. In front of it lies an archipelago of seven islets. The beauty of the surrounding nature is in harmony with the historical, architectural, and environmental values of the old castle and picturesque stone houses.

Traditionally an old fishing village, Maslinica is also known for the Martinis Marchi castle on the south side of the bay, built by the Alberti family in 1708. The castle has been renovated as a modern hotel with a luxury marina and a mooring for 40 boats. 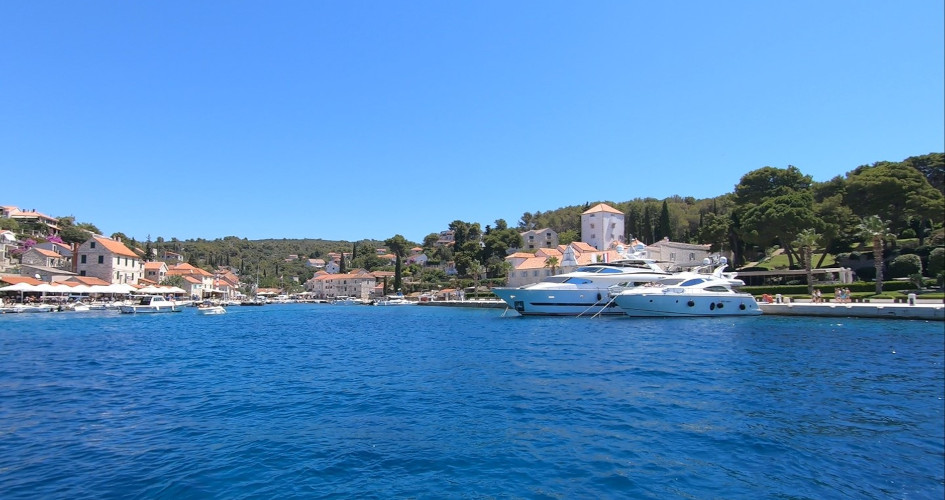 On the way back from Maslinica to Split, before return to your charter base, you can make lunch and swim stop in one of the beautiful coves on the northern coast of the island of Šolta.

A great stop is Nečujam, which many consider the most beautiful bay of the island of Šolta. The bay of Nečujam comprises eight coves.  Nečujam`s innermost cove hides an old shipwreck. An old sailing boat that sank a decade ago is a perfect snorkeling spot as it lays only two meters under the water. 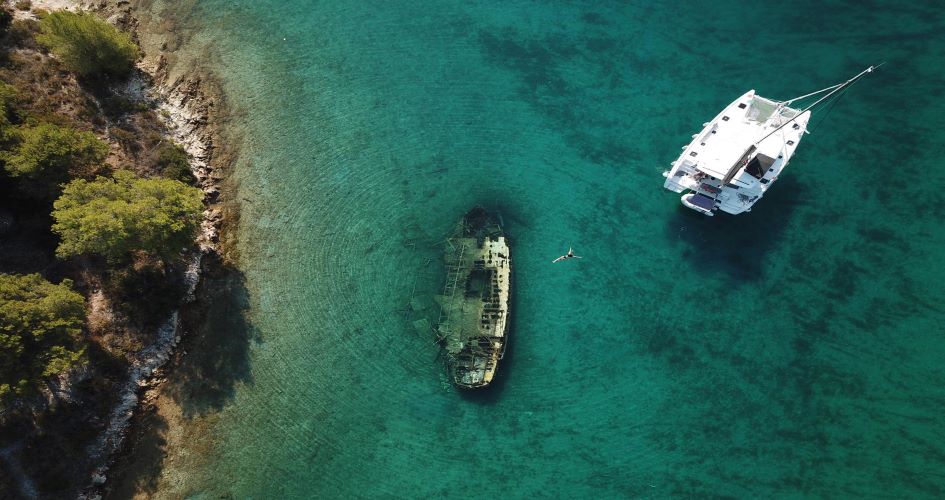