With a surface of 270 km2, Korčula island is the 6th largest island in Croatia. Korčula has a population of 16 000 and is the 2nd most populated island in Croatia. Mediterranean flora and pine forests cover the entire island, which is why the Greek colonizers called it "Korkyra Melaina". The coastline hides many gulfs and coves. Island is a perfect choice for those seeking a peaceful holiday in the ideal ambiance of pristine nature and crystal clear sea.

The main center of the island of Korčula is its eponymous city on the NE side of the island. Korčula town consists of an old part on a small peninsula, a baroque suburb located under old walls, and new parts spread across the coast. It has over 3 000 inhabitants and considers as one of the best-preserved Mediterranean towns.

The main feature of the whole town is Korcula Old Town  – a medieval walled town with its towers, numerous buildings and monuments, cafés, restaurants, hotels, galleries, open-air cinema, and more. 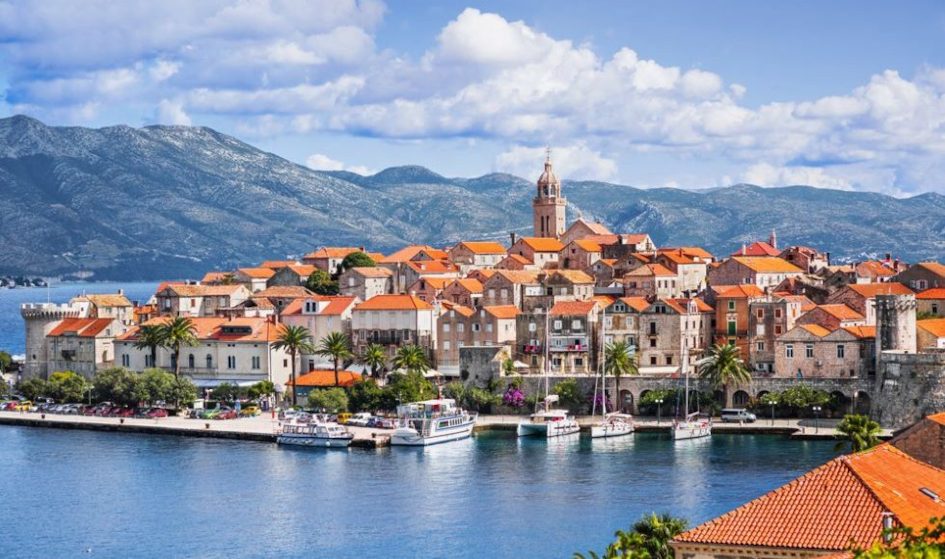 Medieval Korčula town streets form the shape of a fish skeleton and lies on the pole of the old town, which surrounds the eight preserved towers. The fishbone shape was used in the Korcula Old Town design to reduce the effects of wind and sun and provide citizens with sheltered and comfortable accommodation.

The architecture in the Old Town is mainly influenced by Venetian Renaissance. The Old Town center is dominated by the magnificent St Mark’s Cathedral built in the Gothic-Renaissance style, completed in the 15th century at the place of other church from the 13th century. Korcula has a lot of small churches and chapels dotted around Korcula Old Town. 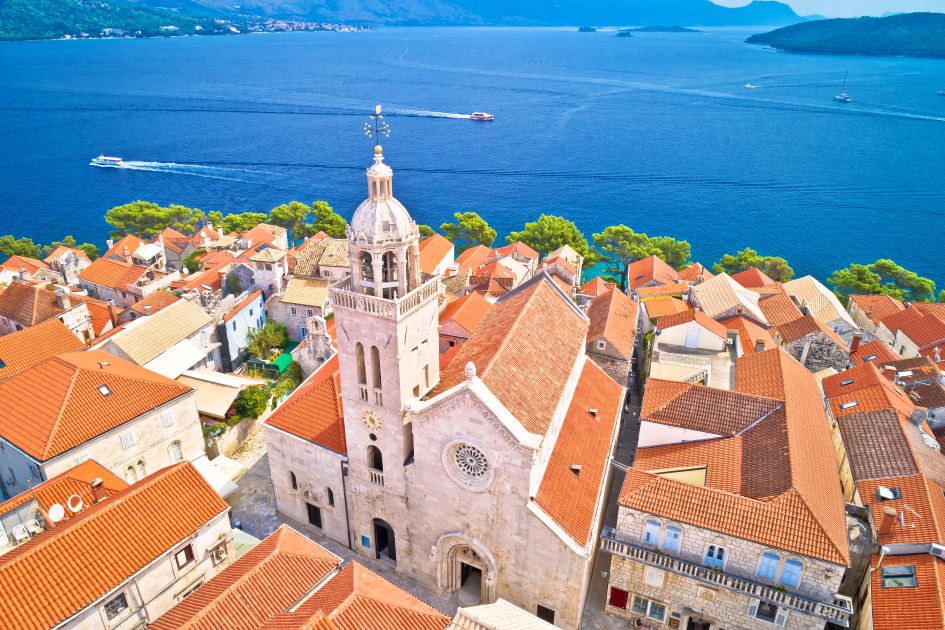 The city’s greatest attraction is the house belonging to the Polo family in which, according to legend, was born in 1254. Marko Polo – a Venetian writer, trader, and researcher. However, although historians agree with the fact he was born in the Republic of Venice, the exact place of his birth remains the subject of speculation. In the Marco Polo Museum, you can see the exhibition with the details of his many trips. 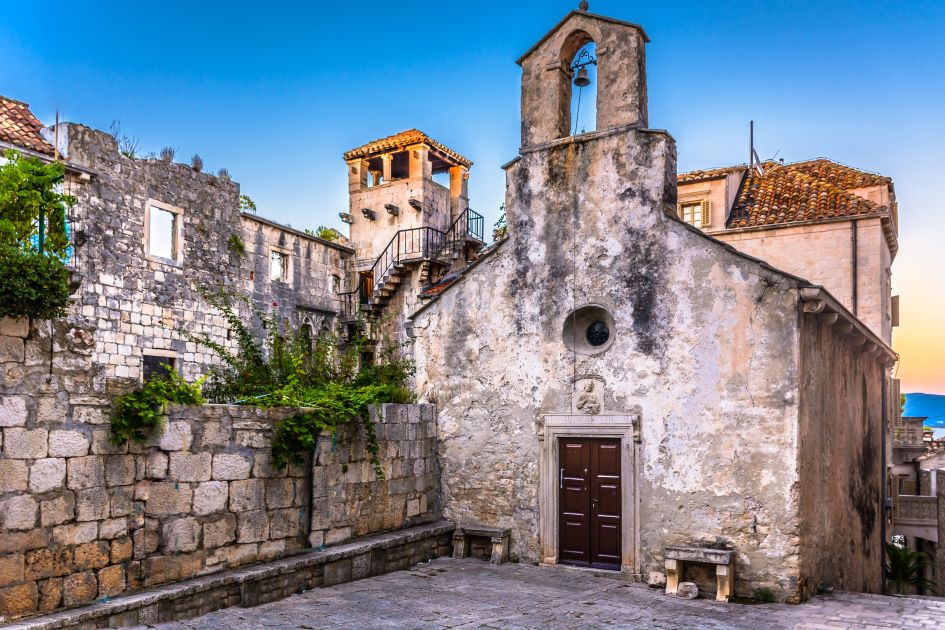 Korčula is an island of sword dances that are performed all summer long to the music of drums and bagpipes. The most spectacular of them all is Moreška. In the summer’s peak, when Korčula streets turn into a dance floor, is the masqueraded Half New Year’s Eve celebration on June 30.

Besides the town of Korčula, the most significant towns on the island are Vela Luka and Blato.

The recognizability of Vela Luka town is based on the mosaics that dominate its center, which were created as part of one of the most important and greatest artistic events on the island: The First International Meeting of Fine Artists - Vela Luka in 1968. If you wish to leave your long-lasting mark in Vela Luka, install your piece of mosaic and become a part of the longest mosaic in the world.

The rich gastronomic offer of Vela Luka is based on numerous quality restaurants and taverns offering local specialties and other dishes. Most of them are in the town center. In the wider area of Vela Luka, there are several households offering authentic Dalmatian ambiance, traditional cuisine of Vela Luka, domestic wine, and more. 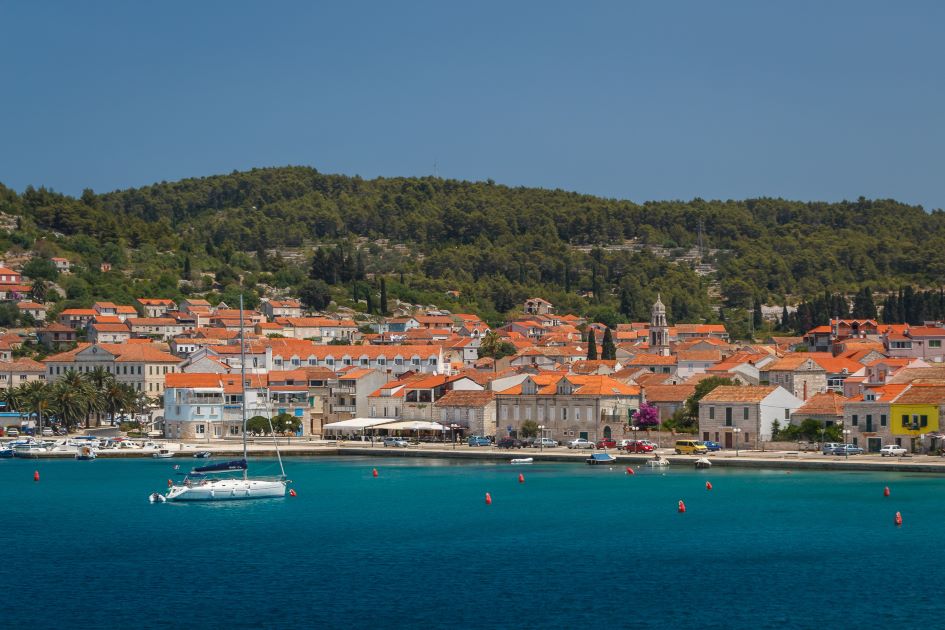 Vela Luka is famous for its specific style of klapa (a capella style) singing, with many years of tradition. Klapa performance is very often happening on various spots on the long seaside promenade with splendid sunset views.

In the 60s of the last century, the development of modern island tourism began, with a focus on health tourism. Cave Kale in Vela Luka is the finding of a unique medical mud on the Adriatic, and at the bottom of the cove is the source of radioactive water Kalac. It has been shown that this mud helps with various rheumatic diseases, multiple spinal deformities, skin diseases, but also female infertility problems.

A newly built, Korkyra Marina in Vela Luka is naturally the safest port in the Adriatic. With 135 berths and crystal-clear sea, it represents the perfect combination of nautical and tourist destinations. 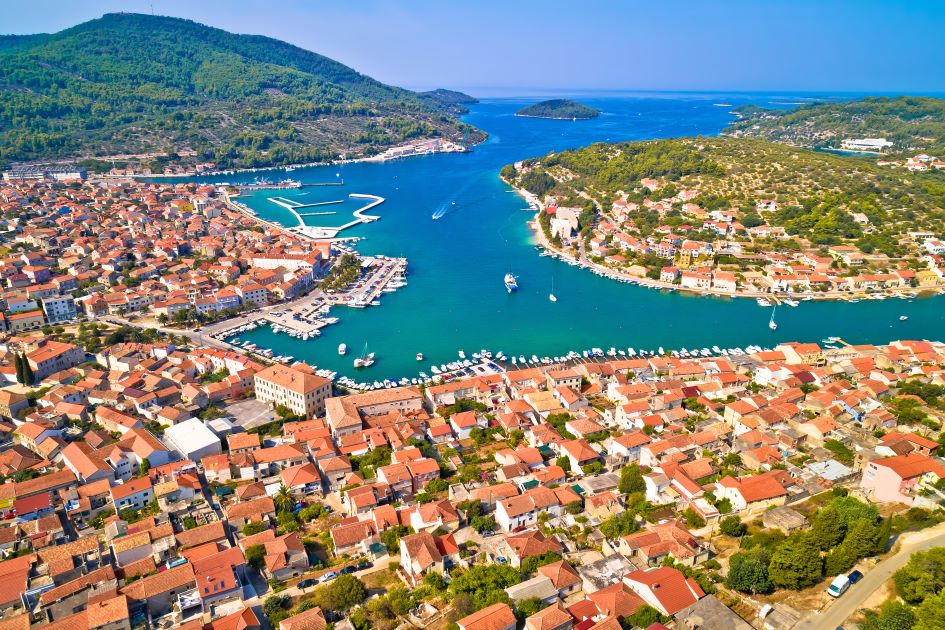 Situated on the hillsides in the middle of the valley in the center of the island of Korcula, this picturesque place is proud of its winemaking tradition, the long linden tree alley and promenade, and the traditional dance Kumpanjija. Visiting this area with a long winemaking tradition, it is inevitable to have a stop at a local wine tasting corner for a glass of a local wine variety, especially after a walk under the linden trees.

Blato is the hometown of Kumpanjija, an intense traditional dance with swords that is being performed in honor of brave men who defended Blato a long time ago against the enemies coming from the seaside. Watch it under the starry sky during Summer on the historical town square, in front of the church and the old town loggia. 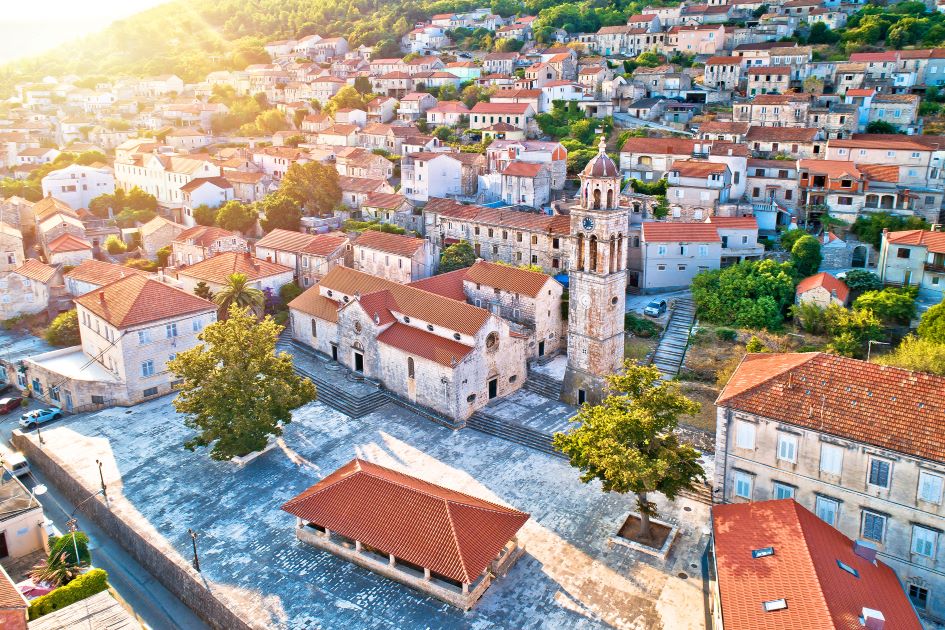 Island of wine and olives

Korčula was formerly famous for its black pines as Black Korčula and is today widely known for its wines and olive oils. In the village, Čara stands a 50 m high protected nature monument – one of the oldest cypresses in Europe. This part of the island is famous for its fertile valley full of vineyards where Korčula produces the famous white wine Pošip.

A must add to your south Adriatic sailing itinerary are the wine tasting tours. Korčula island wine tours include visits to local wineries in villages of Lumbarda, Čara, Smokvica where white wines Grk and Pošip are traditionally produced for centuries. You can also choose to join wine tasting tours of villages on Pelješac where the red wines Plavac and Dingac are produced. 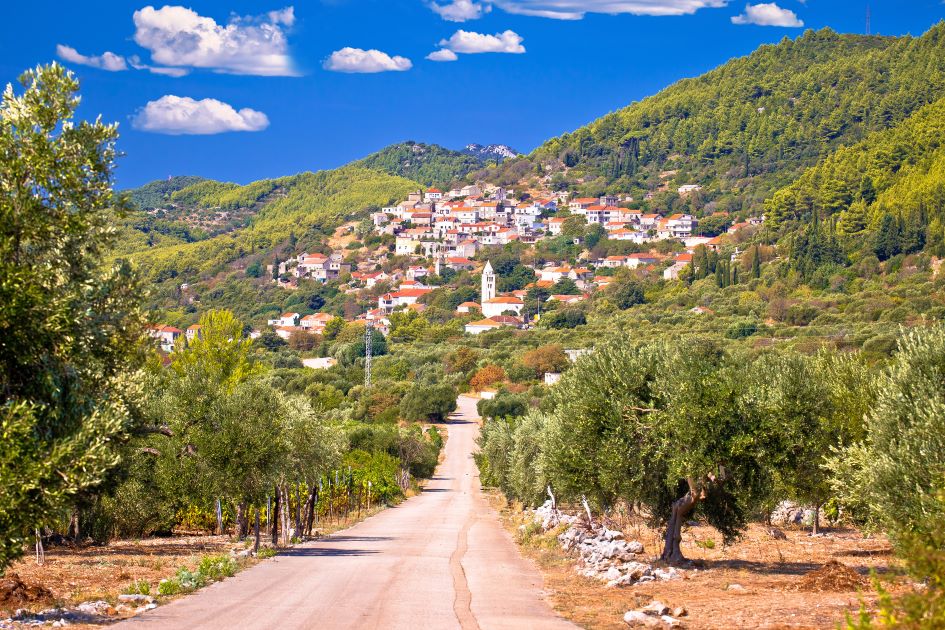 Anchorages and beaches of the island

The north coast is relatively low and easily accessible, with several ports such as Korčula, Banja, Račišće, Vrbovica, Babina, and Prigradica.

The north-eastern side of Korčula will delight you with its diversity and 19 islets, of which the largest are Vrnik and Badija. This archipelago is lovely and ideal for daily swimming and anchoring. 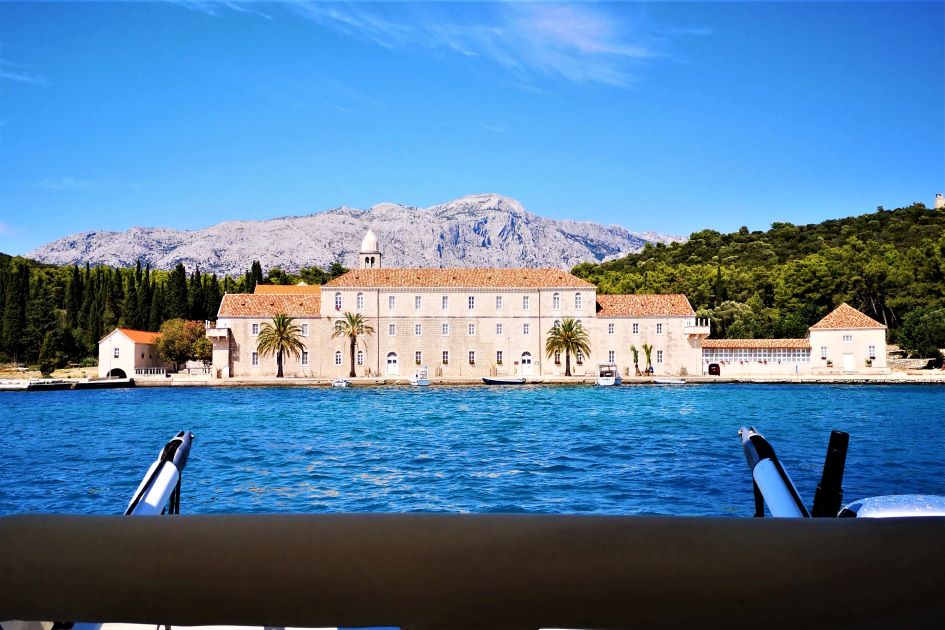 For sailors with children, the perfect choice is a short daily anchoring near the sandy beach 200 m east of Lumbarda in Tatinja bay. In a small, well-protected bay. 200 m from Lumbarda center is a small marina with electricity, water, and showers.

The most famous anchorage on the island is Pupnatska Luka bay on the southern side of the island, sailing 14NM SW of Korčula Town. 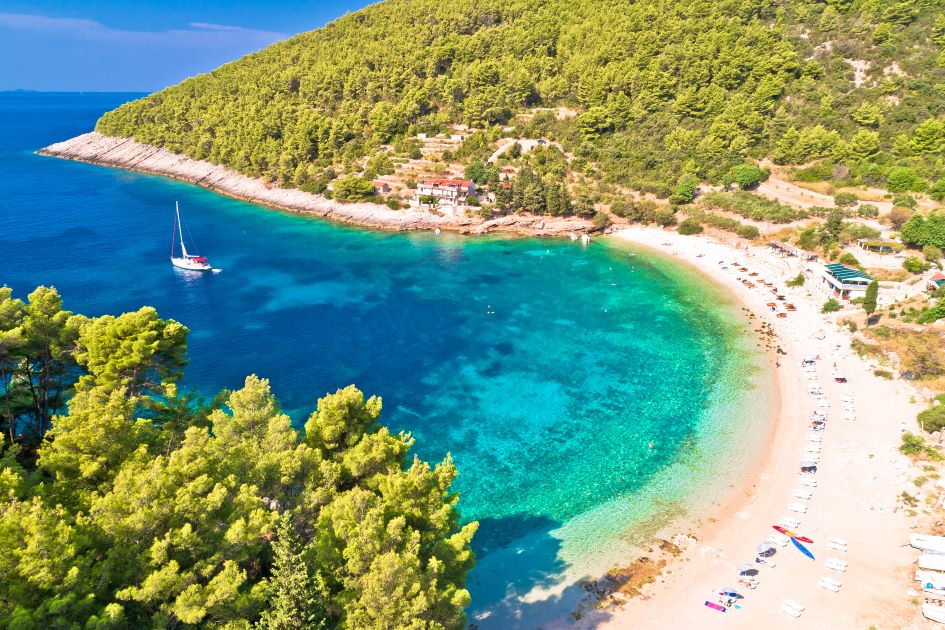 Besides Pupnatska Luka, on the south side are bays that protect from N winds, Zavalatica, Prižba and Grščica.

The largest and best-protected bay is Vela Luka, on the west side of the island. The location of the bay Picena is in the great port of Vela Luka. In front of it is the little island of Ošjak. The bay is shallow, so it is suitable for children and people who can’t swim.

On the northern side of this large bay is Gradina bay with a buoy field. Even though Gradina is open to the W winds and Maestral, a small island inside the bay called “Gubeša” protects the bay partially from the W too. The water in the bay is very shallow, with mainly pebble beaches and with few sand spots. Gradina is a perfect destination for families with children. From your boat, you can enjoy the remarkable sunsets down the horizon of the open seas. 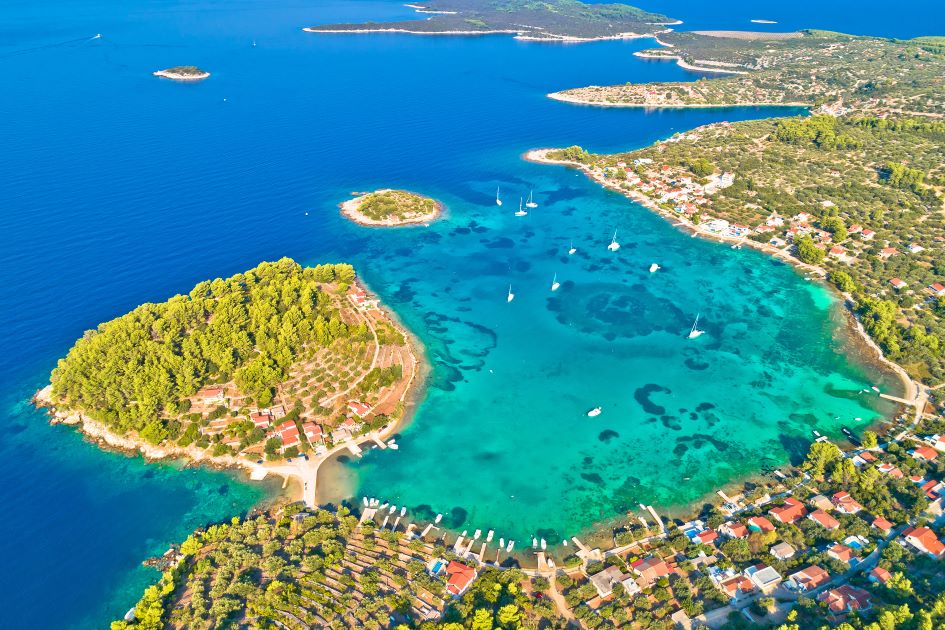