Cres island is the 2nd largest island in Croatia, with a population of 3000. It belongs to the North Adriatic Archipelago with a location on the north of Kvarner Gulf.

Quick and straightforward arrival to Cres is possible to all visitors, by ferry via Krk island and via Istria or sailing on a private boat. Coastal places on the island have particularly well arranged and equipped harbours.

Due to the surrounding of a mountainous frame of the mainland and the sea, Cres has a pleasant Mediterranean climate with continental influences. These facts enable very pleasantly stay on the island in the summertime. Combined with the natural vegetation, the pleasant Mediterranean climate is good for health. You will surely benefit from the fresh air with the influences of sea salt and abundant vegetation. It is believed that the Cres-Lošinj area is suitable for treating respiratory diseases. 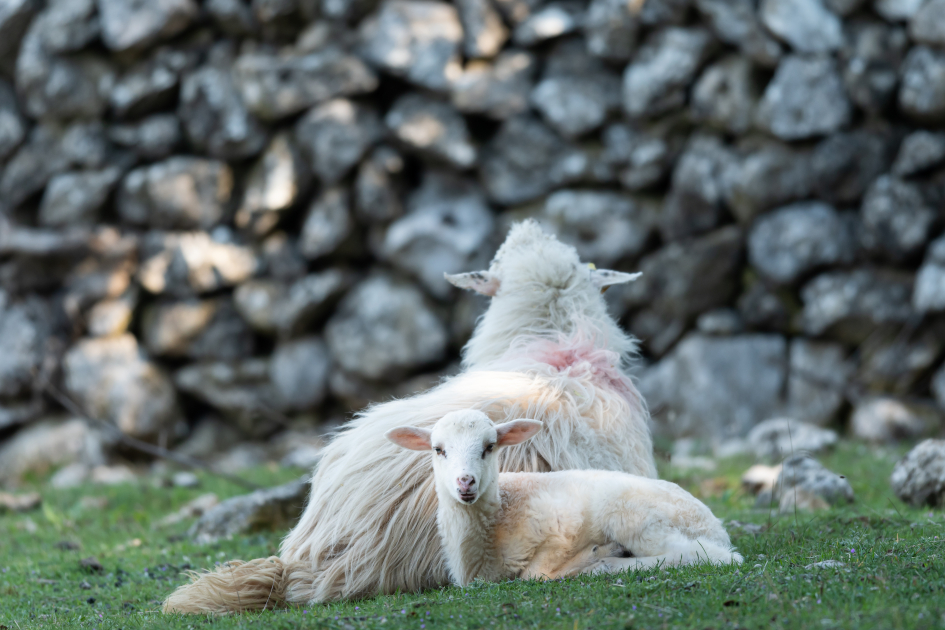 Sailing the Cres coastline, you will find countless beautiful bays with hidden beaches and crystal clear sea where you can anchor. While sailing in the waters of Cres, there are big chances to meet friendly dolphins. The indented coastline allows you to find a good shelter at all times, and sailors will be pleased because, thanks to the high shores, sailing without big waves is very pleasant. Especially significant for the families with children is the fact that almost every bay is sandy. There are several small towns and villages that you can visit: Cres, Lubenice Valun, Martinšćica, Osor, Beli, Punta Križa, and numerous more small villages. 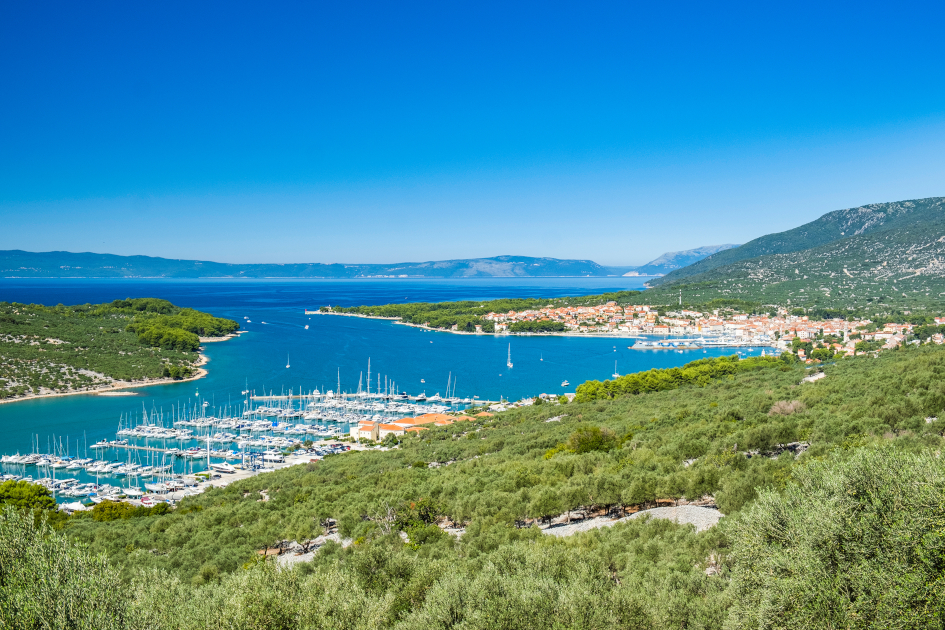 The town of Cres is the administrative center and the largest settlement on the island. Once called Crepsa, it has been inhabited since the Illyric times. It had an essential role due to its harbor, natural environment, and vicinity. The Venetians had the most significant impact in the 14th century. Their influence is visible in the numerous churches, palaces, town gates, and towers that you will see while walking along the narrow streets and alleys of this small North Adriatic town.

Cres is a fortified city with a crowded urban structure, located at the bottom of a well-protected bay. At the bottom of the same bay is ACI marina Cres with 440 berths in the sea and 70 on dry. 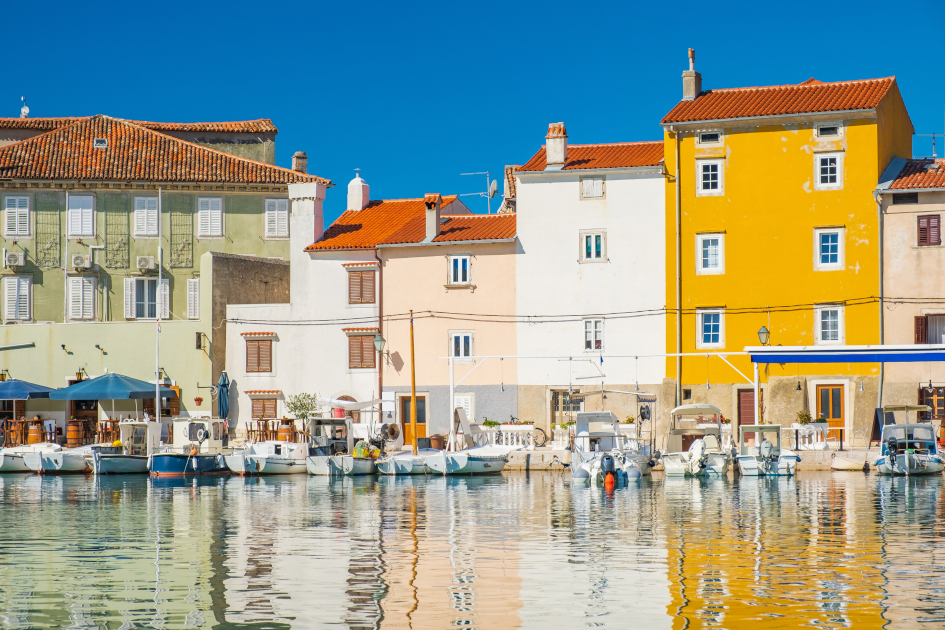 This magical historic village has a position on a 378 m high cliff above the sea. Its remarkable architecture, plenty of chapels, and the cliff overlooking the sea are fascinating.

The most impressive thing about Lubenice is the spectacular view of its famous pebbly beach St. John and the coast of Istria.

St. John's Bay, also known as Lubenice beach, is the most famous bay on the island, located directly beneath this magical place.

Near Lubenice beach is Blue grotto Beach which can be reached only by boat. A natural phenomenon Blue Caves - large and small hall caves lit with turquoise blue light, which penetrates through the underwater passage, is something that needs to be seen. 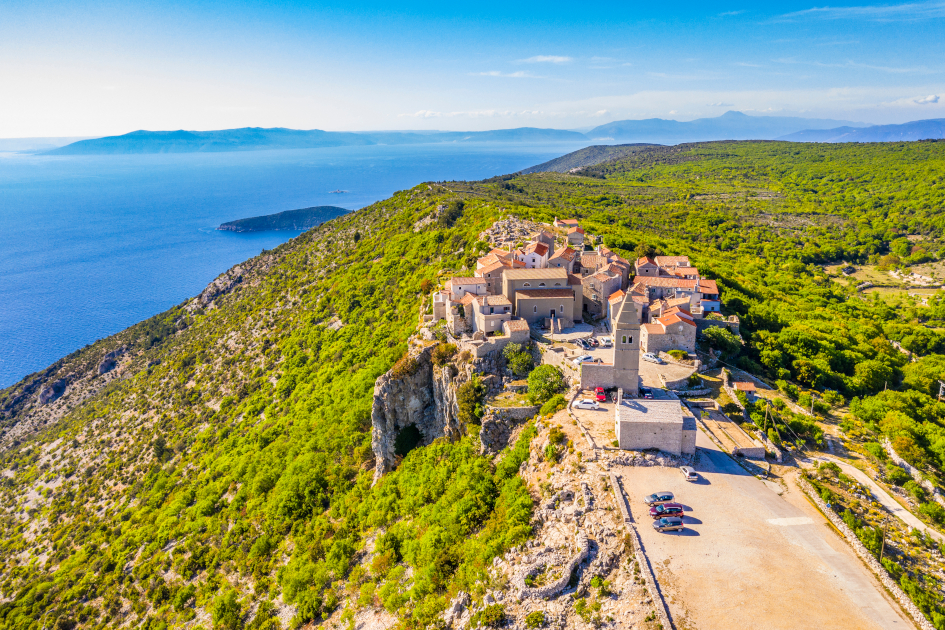 Valun is a typical fishing village sheltered by the Bay of Pernat, and nestled by the Bay of Cres, is known far and away for discovering the famous Valun Plate. The plate was found in the small Church of St. Mark, in the village cemetery.

This exceptional document, significant for the history and culture of Croats in the region, dates from the IX. Century. The plate exhibited on the wall of the Parochial Church of St. Mary. The Valun Plate is known for its well-preserved bi-lingual inscription, one in the Glagolitic and the other in Latin text.

Valun is known for its gastronomic specialties, especially shellfish and other seafood, prepared with expertise and excellent care, using only traditional recipes.

If you want to add Valun to your sailing itinerary, it is recommended only when the weather conditions are stable. It has a small port with a jetty that can hold about ten berths for yachts, with water and a power supply. In the case of Bora, the port is not recommendable. 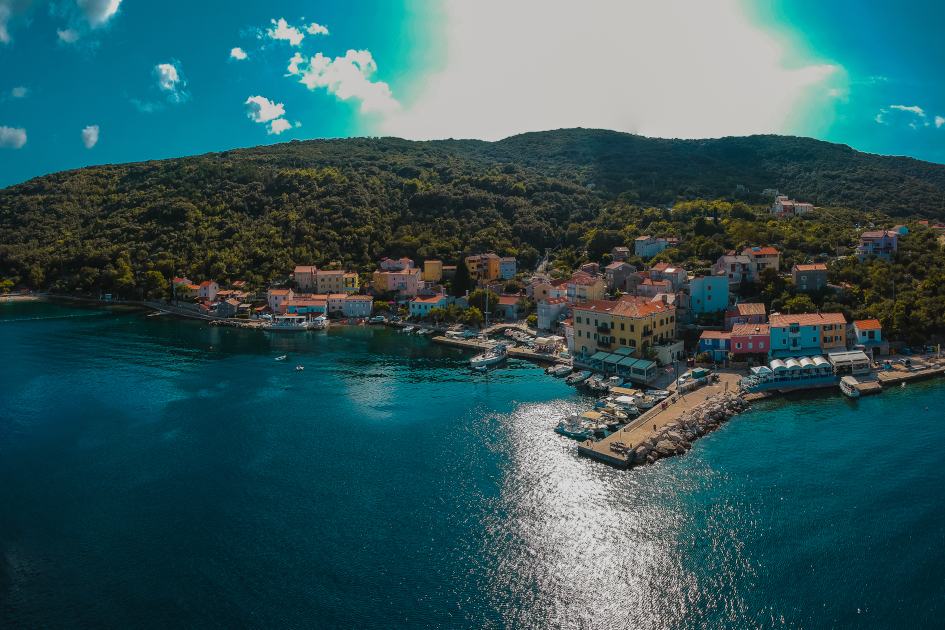 Martinšćica is a small fishing village located on the western coast of the island of Cres, in a beautiful bay surrounded by enticing beaches. The port is well protected from the Bora that blows heavily in the port. Pay attention to the south S-SW, which creates a rough sea. It is possible to moor on the inside pier or anchor in the middle of the bay (depth about 5 m), where the muddy bottom holds well. 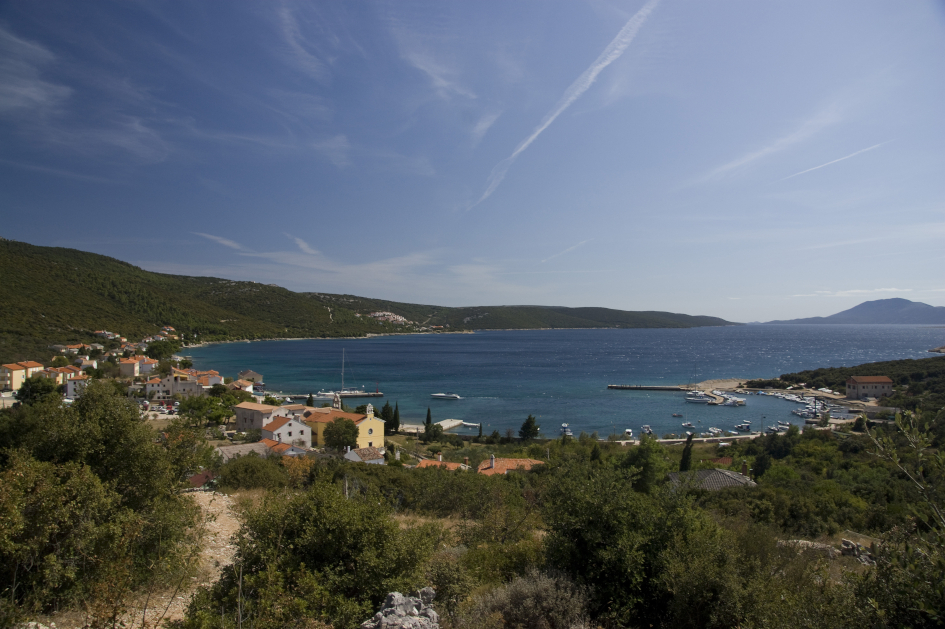 The city walls' foundations reveal an ancient history, which can be traced back to the prehistoric era – 9th century BC. This town's historical nucleus is the ancient town square with beautiful buildings from the 15th and 16th centuries, the town hall, Bishop's palace and magnificent cathedral, and bell tower. Osor becomes an open air-stage of rich cultural events during the summer months, of which the most important are Osor Musical Evening.

Thanks to a human-made canal that enabled passage and navigation from one sea to the other, this is where the primary transit traffic between the North Adriatic and Dalmatian coasts took place in the past, making Osor an international port. This passageway shortens the route for sailing to the island of Pag. The closed bridge is a little less than a couple of meters. Pay attention to the speed limit of five knots when crossing the channel. The boats that come from the south have the right of passage. Therefore, those waiting must maneuver or dock. The canal is twelve meters wide and about three meters deep. 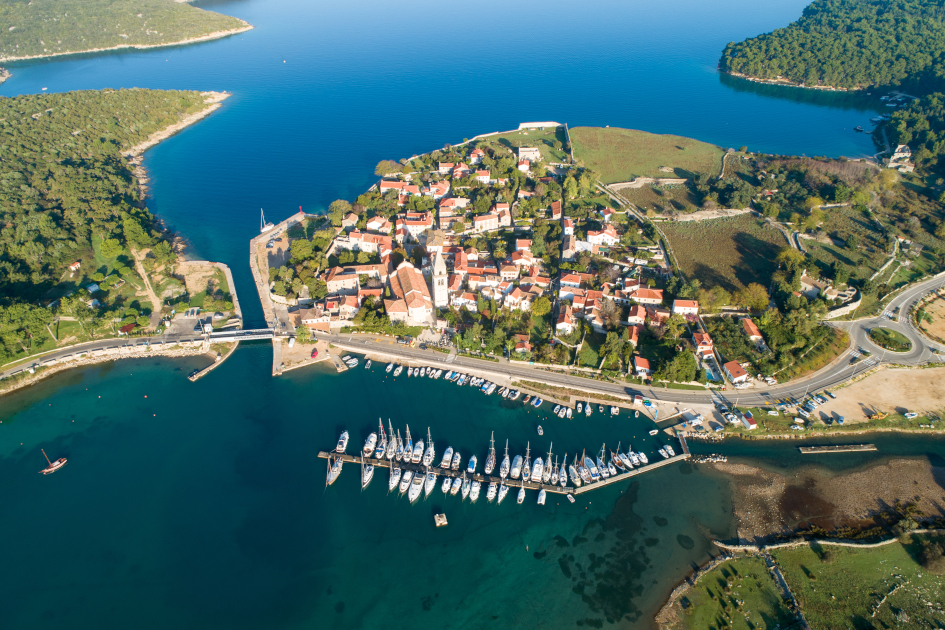 Beli is one of the oldest and was one of the most important villages on the island in the past.

Beli is an acropolis type of village located on a 130-meter high hill in the north of Cres, where previously a prehistoric hill-fort stood. It is a typical coastal close-built village. There are many cultural and historic landmarks in Beli, some of which are: a parish church with a semi-circular apse, previously a Romanesque church in which there are several valuable Glagolitic inscriptions, a Romanesque church St Mary with a museum collection, a Gothic one-nave chapel St Anthony in the local cemetery, prehistoric stables in front of the entrance to the village and a Roman bridge over the canyon and a stone head of King Abel.
Beli is an ideal place for families and campers, with a lovely pebble beach and a well-protected harbour. Beli is also a favorite starting point for long walks in the beautiful woods of Tramuntana.

Punta Križa is located in the southernmost part of the island of Cres and is a real national park of rich flora and fauna. Heading to Punta Križa means wandering into the green pine forests, and green meadows where you will see sheep grazing and herds of fallow deer. Punta Križa is a favorite beach and anchorage for boaters sailing in the area. Beautiful bays of sharp rocks and sandy bottom are suitable for anchoring. The bays are protected from the south and partially from the Bora. It's a must-visit place on the North Adriatic sailing itinerary. 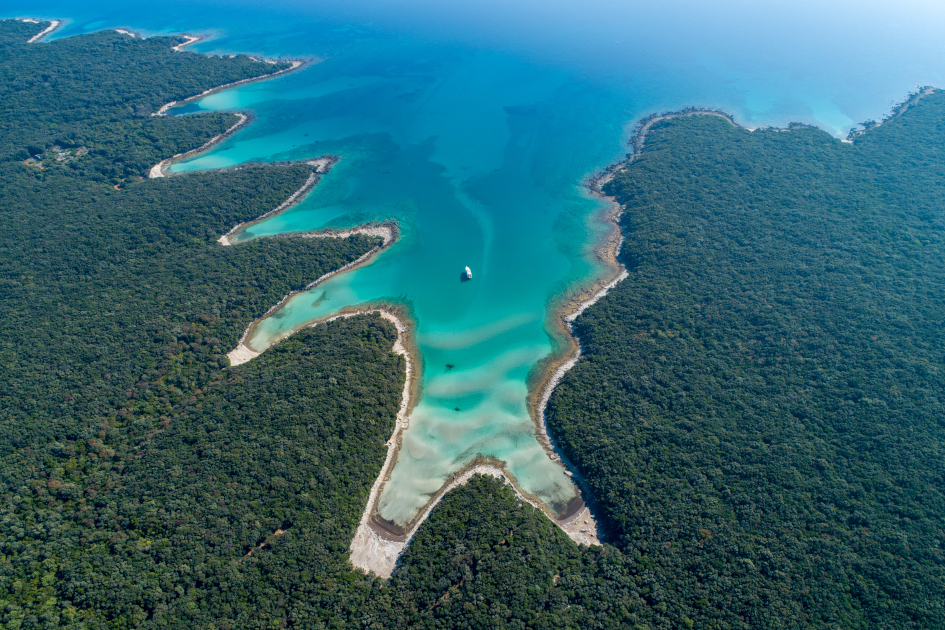 On the Island, Cres is one of the last habitats of a scarce bird Griffon Vulture and the unusual natural phenomenon of freshwater Lake Vrana in the island's heart.

Cres is a paradise for all lovers of untouched nature. Active holiday lovers can enjoy swimming, fishing, diving, snorkeling, windsurfing, kayaking, jogging, biking, and trekking. Or you can relax while sightseeing, dining, filming, photographing, painting, meditating, collecting medicinal and aromatic wild herbs, and many others. 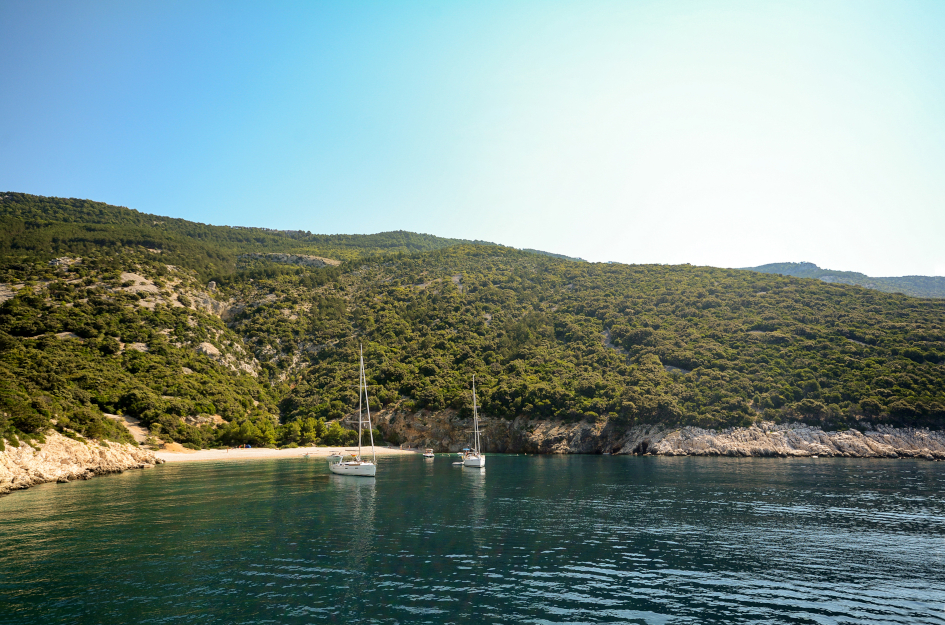