The island of Krk is the largest Croatian island, with a surface of 405,8 km² and around a 190 km long coast. The closest mainland is only about a hundred meters away, and its neighbouring islands are the islands of Cres, Goli, Rab, and a few smaller islands.

Krk is very easily accessible, from the land – over the Krk bridge; from the sea – by boats into the ports or small marinas and by ferry to the Valbiska harbour. If you are traveling by plane, you can fly down to the Rijeka airport near Omišalj.

Krk has an unusual and varied relief: from picturesque gentle coves and lagoons, along with fertile fields and dense forests with sub-mediterranean vegetation, to the parts of bare limestone and real mountain landscape. The island of Krk is densely populated and very fertile because the east coast mountains protect the entire island from the cold north wind, also called Bora.

Around twenty small islands, cliffs and reefs are located around the island. Krk is the island with the highest number of inhabited villages, a total of 68. The island's most significant settlements are Krk, Punat, Omišalj, Baška, Vrbnik, Malinska, Njivice, Dorbinj, and Šilo Klimno.

The city of Krk

The city of Krk is the administrative, political, economic, and religious center of the island of Krk. The city's history and culture are based on more than 3000 years of continuous life. It is believed that the city's founders were the Illyrian Liburnian tribe Curicta and that the city got its name after them.

The blind Greek Homer mentioned the city of Krk in his famous poem under the name of Koureto, and many researchers connect this name with the inhabitants of the island of Krk.

With the expansion of the Roman Empire, the city of Krk became a municipality. It is assumed that it had two thermal baths, the floor mosaics of which are partly still visible.

The St. Mary's Cathedral, the Krk bishops' seat, and the Frankopan family castle are the most famous city motif.

Seafarers visiting the city of Krk by boat have on disposal two piers, which are often busy. East of the west pier - several buoys for smaller boats and mooring. The city port has insufficient protection from south winds and Bora. 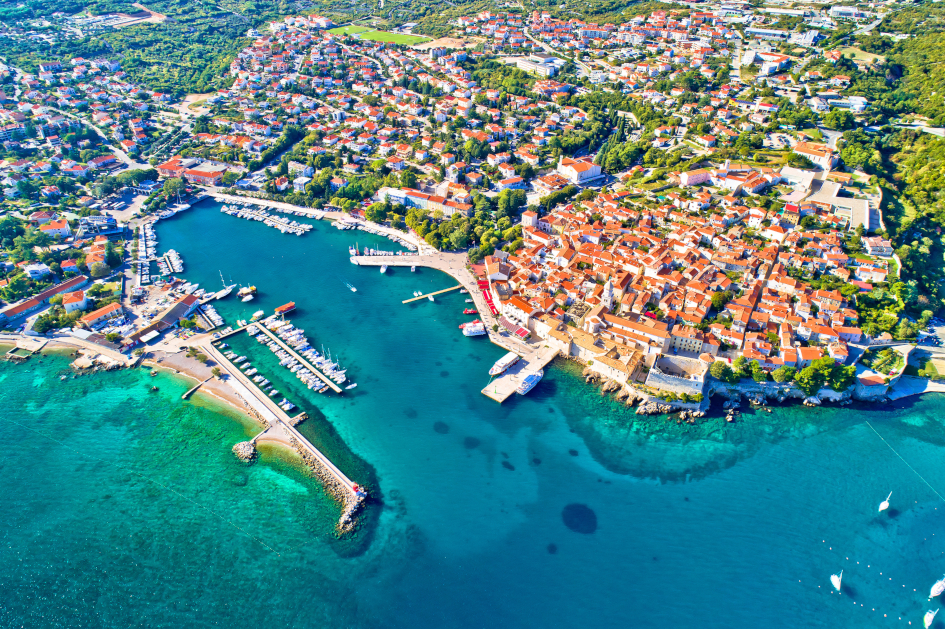 Punat is situated in the southwest part of the Island of Krk, in one of the most protected bays on the Adriatic.

Marina Punat is one of Croatia's largest nautical centers, with 800 berths in the sea and one of the best starting point for sailing around the Kvarner Bay islands and the North Adriatic. From Punat, you can charter a bareboat, skippered or crewed sailboat, catamaran, or motor yacht.

In the center of Punat bay is a small island of Košljun with the Franciscan monastery. This small island's size is slightly larger than 1000 m2. 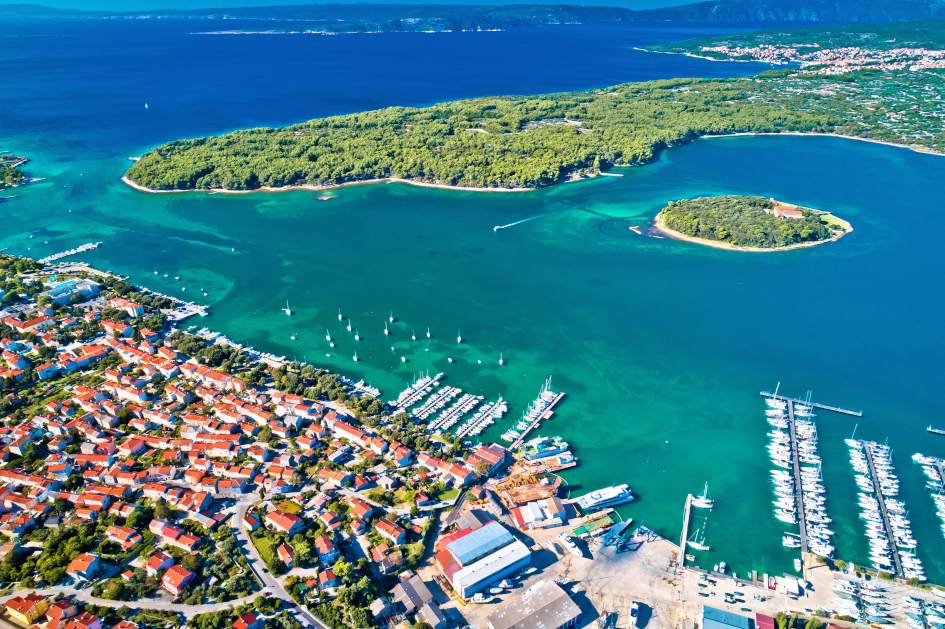 As soon as you leave the bay of Punat, you will find gravelly beaches – a landmark of the island. The beaches are numerous, and a bather will always find a spot. The active holiday lovers can spend their time on sports activities: water sports, beach volley, windsurfing, waterskiing, cycling, paragliding, jet skiing, aqua park. Visitors to Punat arriving by boat will find the coves between Punat and Stara Baška interesting for the beautiful secluded gravelly beaches and crystal-clear sea. 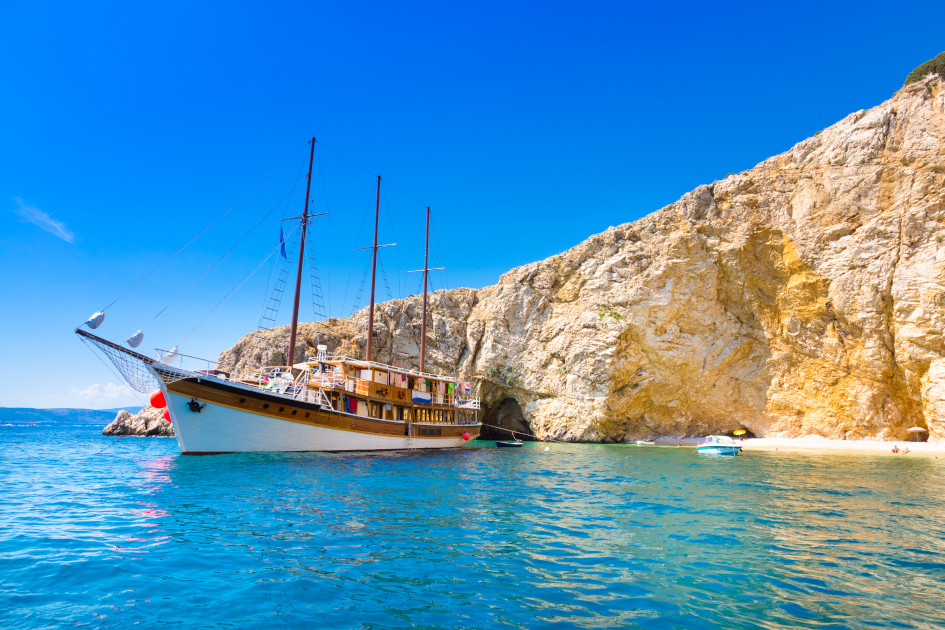 Omisalj is located on the northwest coast of the island Krk and is the first place south of Krk's bridge. With the city of Krk, Omisalj is the oldest settlement on the island, and today it has about 1871 inhabitants.

It is built on a cliff about 85 meters high and offers a magnificent view of Kvarner bay and the town of Rijeka. Omisalj has a rich cultural and historical heritage visible in its old town streets, churches, chapels, and bell towers. 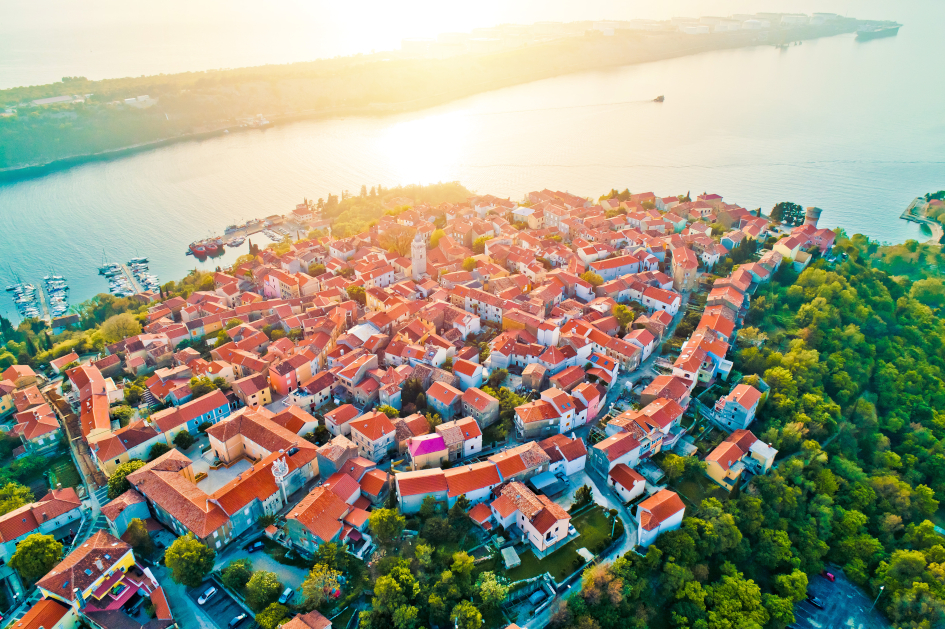 Baška is a coastal village located in the south of the island of Krk, located next to a 2 km long beautiful pebbly beach.

The area of Baška has been inhabited since prehistoric times. Baška is especially famous for Croatian history and culture as a Croatian literacy source through Glagolitism and the Baška Tablet. In addition, there are many landmarks for lovers of cultural tourism. The most prominent of which is the church of Sv. Lucius in Jurandvor, the site of the Baška Tablet.

If you are visiting Baška by boat and lucky, you could find a mooring in the city port of Baška inside the breakwater. The harbour has adequate protection from all winds, but you will have unpleasant swell if there's Bura and Jugo. 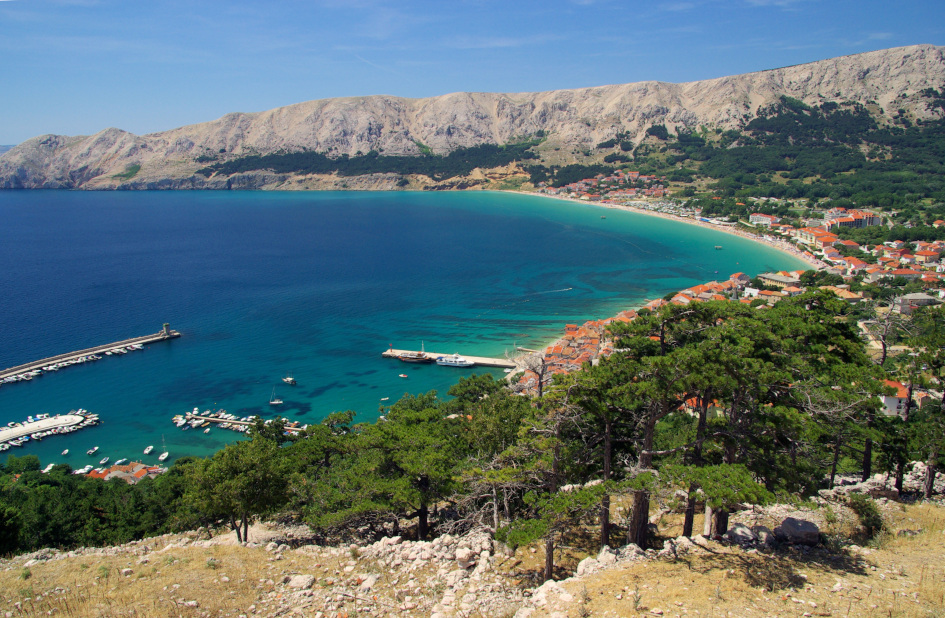 Vrbnik is one of the oldest settlements on the island of Krk, located on the island's east coast. The old town is perched on a cliff 48 meters high overlooking Novi Vinodolski on the mainland.

Its inhabitants are mainly engaged in growing grapes. The west side of Vrbnik is surrounded by vineyards where famous wine is cultivated in the Vrbnik field, known as Vrbnicka Zlahtina. In the old part of town are well-known restaurants offering the specialties of Krk.

If Vrbnik is on your sailing itinerary, you can find a berth in its city port. However, sailing in and out of the harbour is dangerous when bura is blowing. 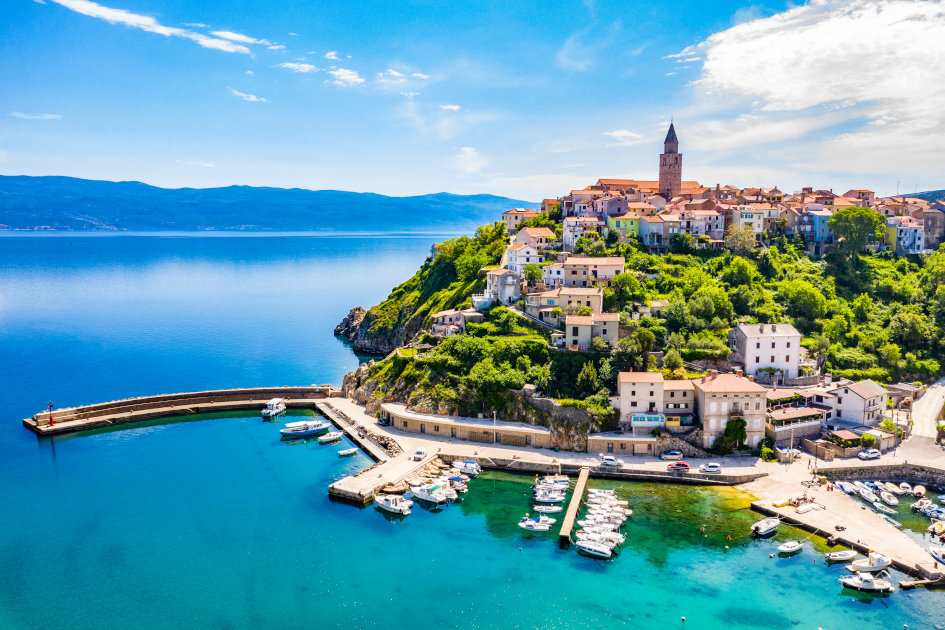 Malinska is located on the northwest coast of Krk island, in a large bay known as a safe harbour.

There are numerous restaurants, bars, and clubs, making Malinska well known for its nightlife and entertainment. In Malinska, you can enjoy gastronomic specialties, cultural events, and folk festivals.

Along the coast are walk paths and biking trails that connect Malinska with Njivice on the north and harbour Porat on the south. You can enjoy swimming at its nearby pebbly, sandy beaches and hidden coves.

If you are sailing close to Malinska, its city port offers a few moorings for sailboats, yachts, and mooring buoys. 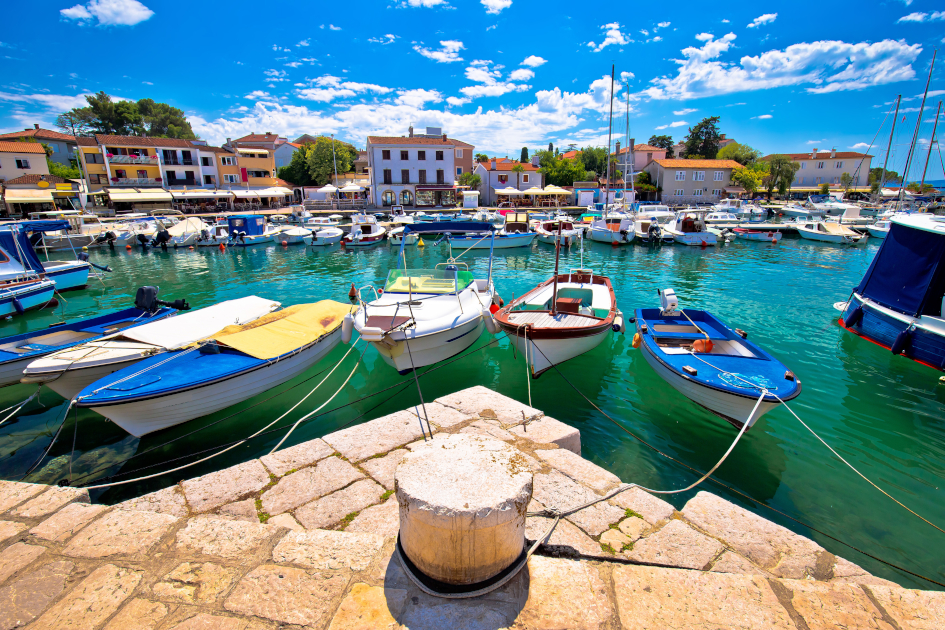 The island of Krk is a sailing paradise of Kvarner bay and North Adriatic. With numerous wide bays, pebbly and sandy beaches, it's a perfect sailing destination for families with children. If you are looking for a relaxing sailing vacation, island Krk and its small villages are unavoidable.