Our weekend onboard Lagoon 570 “Mala” 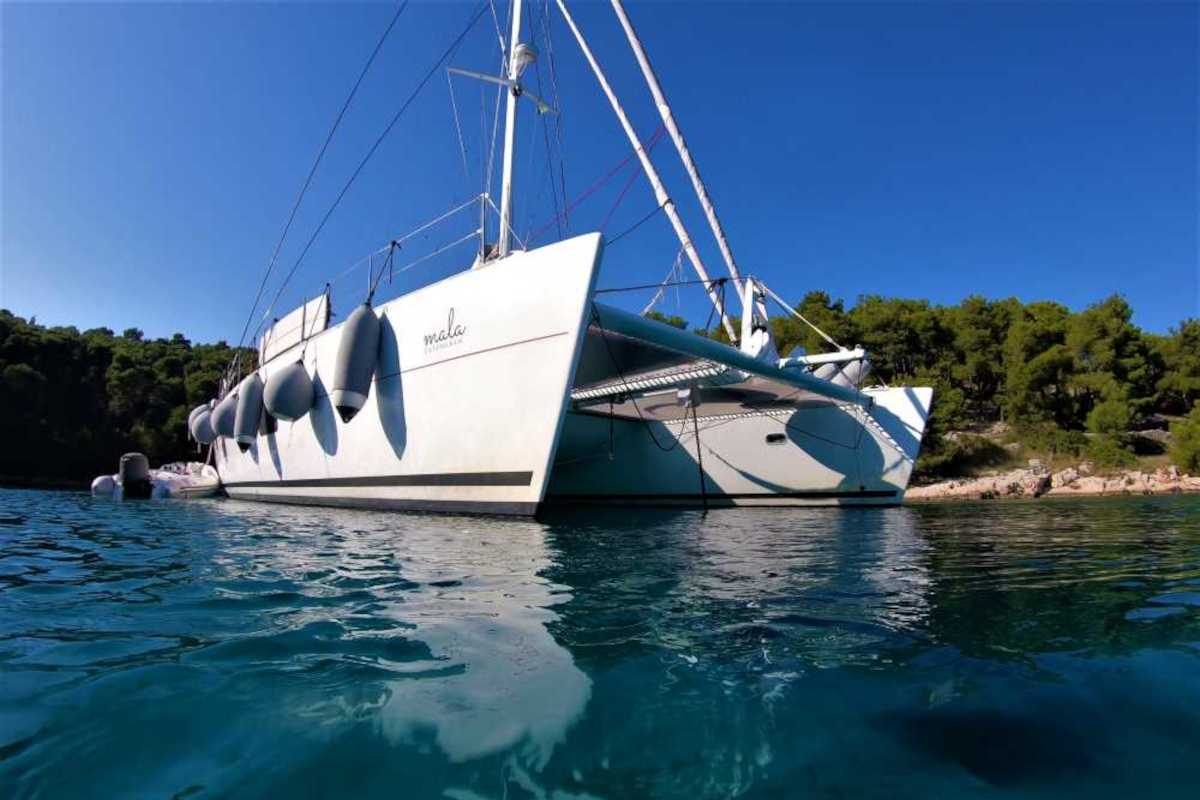 To close the successful season, our choice was to spend a weekend sailing onboard our favorite crewed luxury catamaran Lagoon 570 “Mala” in Croatia. What makes her so special is her amazing crew Sanja & Zoki.

Should you be looking for a crewed catamaran sailing holidays in Croatia you can be sure that Mala will fulfill all your expectations. She is spacious, really comfortable, has lost of extra amenities on disposal for her guests.

We have set off from the small place near Split towards island of Brač to find a perfect bay to drop of the anchor and for a swim. On an hour sailing from Split is Milna bay, on the western side of the island. Milna bay is one of the best protected bays on the Adriatic. 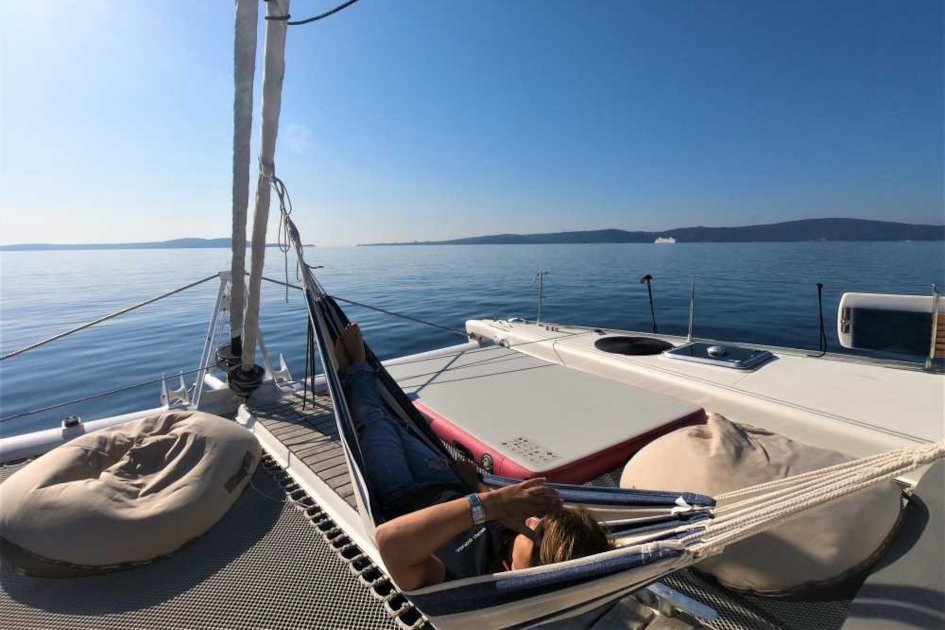 For the last weekend in October, the weather conditions are surprisingly good for this time of the year, Air 25°C, Sea 20-22°C.

After a delicious brunch and short, refreshing swimming, we continued our sailing trip towards the island of Hvar to get there by the sunset. The greatest thing about sailing at this time of the year, in autumn, is the fact that you can be totally relaxed and carefree about finding the anchorage spot or berth in the marina. On our sailing route towards Hvar, which is one of the most famous seafarers destinations on the Adriatic Sea, we met just a few sailing boats and catamarans. 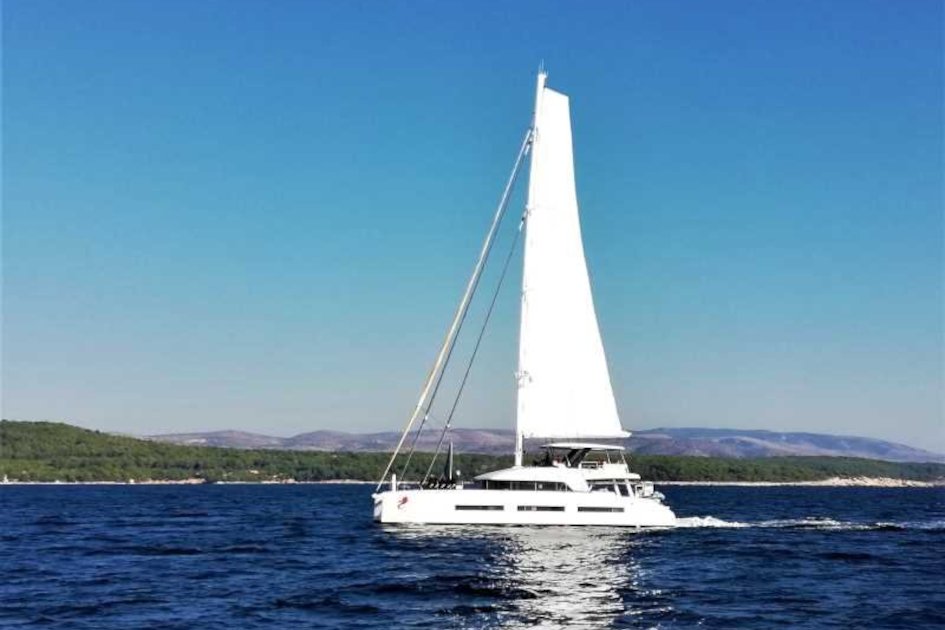 Island Hvar belongs to the Middle Dalmatia region and is part of the Split archipelago, the sunniest and the longest Croatian island. With the area of 299.6 km2 and a population of around 10 500. Hvar is an island of indented coast, crystal clear sea and scenic beaches, plenty of sunshine, untouched nature, a wealth of historical and cultural heritage. Lavender, olive and wine scents, and always hospitable hosts are the reasons the island of Hvar is so famous. Pleasant Mediterranean climate with mild winters, warm summers and many sunny hours make a vacation and stay on the island pleasant throughout the year.

Hvar Town is situated in the middle of the south side of the island. It is an ancient city of rich history, culture, architecture and beautiful nature. The city of Hvar is proud of the oldest folk theater in Europe. Hvar has been built over the centuries by recognized domestic and foreign architects. On the walls and streets of the city is the most visible spirit of the Renaissance era.

It is the favorite destination of the worlds jet set who visit the city harbor with the mega yachts and cruisers. Hvar is a place where you can come to see and be seen. The city abounds in top service restaurants and nightclubs for great entertainment. Of course in October it`s quite and most of the places are closing, but anyhow you can find a place for drink out and dinner. 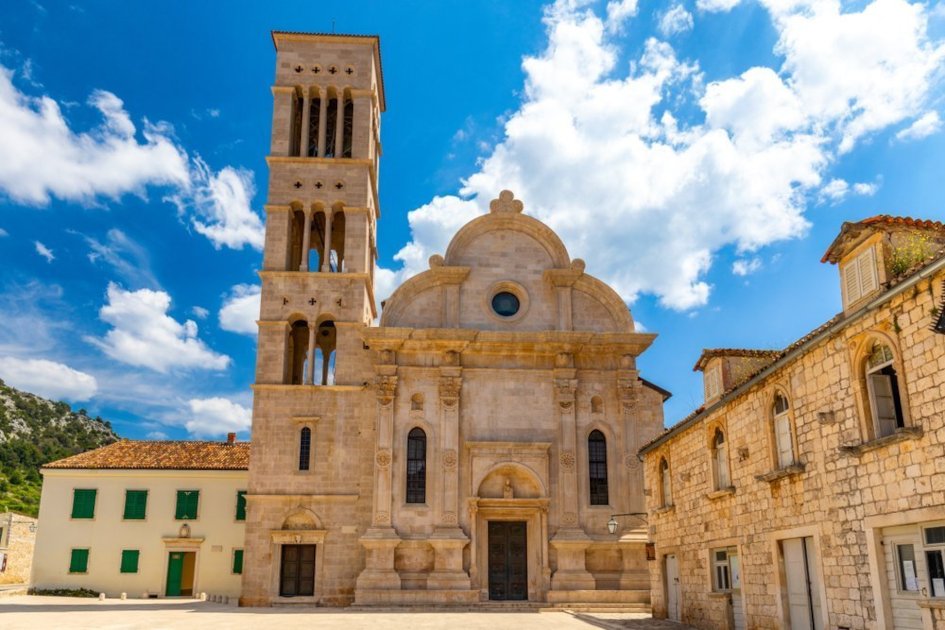 On the nearby Pakleni islands you can find your oasis of peace, in ACI Marina Palmižana or in one of its anchorages, Vinogradišće, Taršće, Soline… To reach the city of Hvar from Palmižana is possible by taxi boat or with the boat`s dinghy. We have decided to spend the night on the anchor in Ždrilca bay and get to the city of Hvar by Mala`s RIB boat.

To wake up in a secluded bay surrounded by crystal clear Adriatic sea and a million dollars view is priceless. In such an environment you can fully indulge yourself and enjoy. Untouched nature, sound of the crickets and drops of the morning dew, that`s all we need. As it was the 2nd day of our weekend sailing tour, we had to slowly take the sailing route back to Split. But before the return we still had the whole days of sailing.

After lifting up the anchor, we sailed into Hvar city port, it`s such an amazing view from the sea. During the long and rich history, due to its favorable maritime position, Hvar became one of the most important cities on the Mediterranean.

Our sailing route back we took along the southern coast of the Pakleni islands, stopping by in some of the most attractive anchorages. The southern shores of the Pakleni islands are leaving breathless. The contrast of the grey and rough coastline and the dense green forest is striking. The coast is rough due to the strong southern winds and waves. Besides the rough coastline on the south side are several gentle coves that are safe for anchoring and perfect for day swimming. The most famous are Vinogradišće, Taršće and Soline. Vinogradišće is the most attractive as there are mooring buoys and a few restaurants ( Laganini, Zori, Toto`s, Bacchus…)

As our last stop to close this amazing weekend sailing we made a stop in Stiniva bay, on the west side of Island of Brač. This is nice, hidden bay with pine trees surrounding. It`s an excellent for anchoring and swimming in crystal clear sea. Lagoon 570 “Mala” has bunch of extra equipment and water toys for her guests. Water skiing, donut, wakeboard, stand up paddle board, snorkeling equipment… We decided to raise the adrenaline with donut.

If you are looking for sailing holidays and crewed yacht charter in Croatia, our TOP recommendation is certainly “Mala” and her crew. What you can expect is unforgettable sailing experience visiting the best places on the islands, excellent gourmet experience and lots of memories to take back with you.