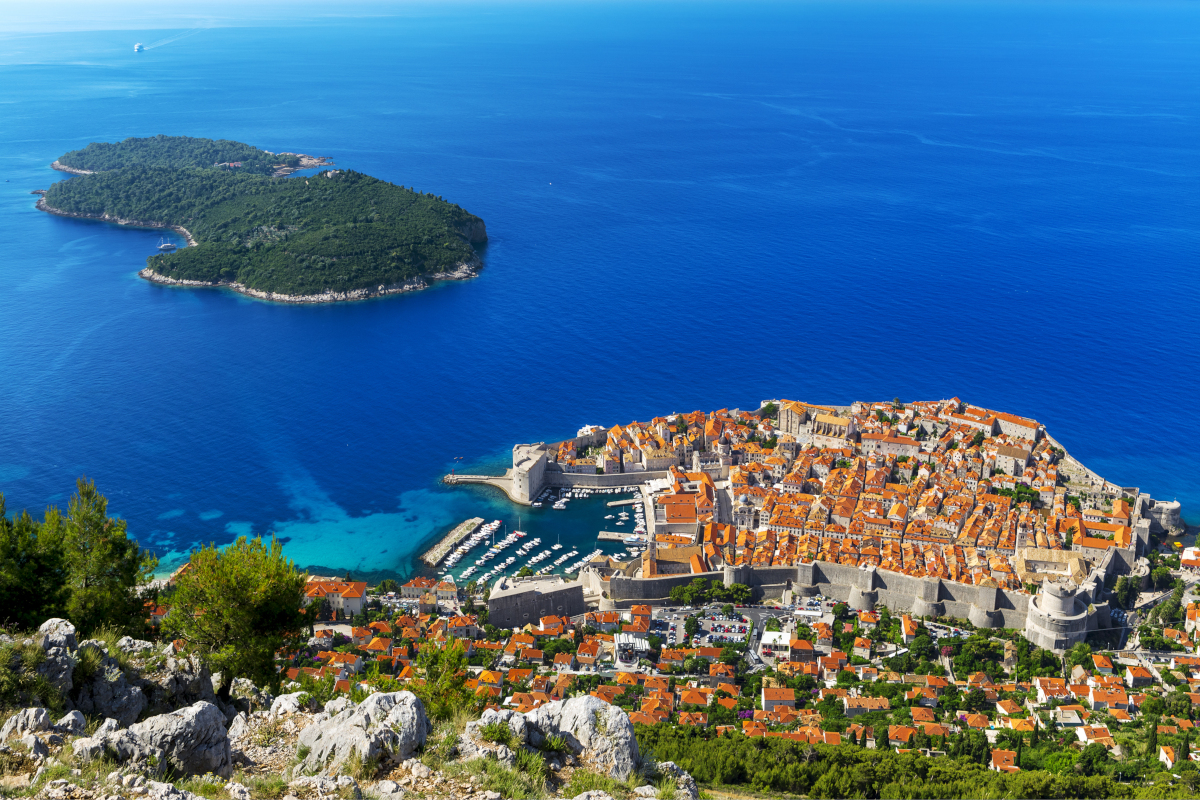 One-way sailing route from Dubrovnik to Split/Trogir or vice versa is a perfect choice if you want to see as much as possible in one week of sailing. One-way yacht charter means to take the yacht at one of the charter bases in the Dubrovnik area, and leave it in Split /Trogir at the end of the week.

The standard check-in time is on Saturday from 17h; if you`d like to leave earlier, we suggest booking an early check-in service.

The old town is on the list of UNESCO world heritage since 1979. 1940 meters of unique medieval walls surround the old town. The city walls in their original form preserve and open to visitors as the cities flagship attraction. Traces of the rich history are visible in every single stone and wall of the old town of Dubrovnik.

What to expect: the enchanting Old Town, beaches, sun, culture and beautiful nature, and of course, food. The City is a destination of culture, festivals, prestigious art happenings, major open-air events, excellent artists and athletes, and architectural treasures.

Dubrovnik is Number 1. attraction in Croatia. Needless to explain. A must-see! 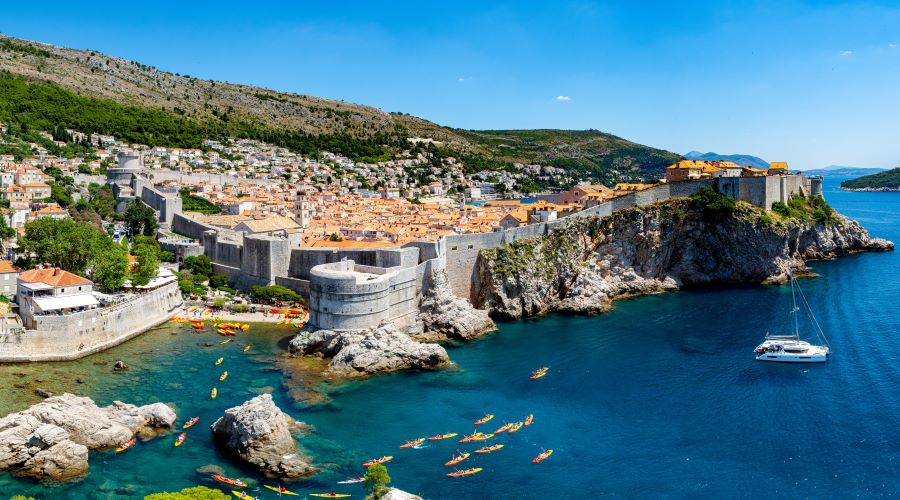 The most famous place on Peljesac is Ston. In Ston, there are the oldest European saltworks and medieval stone walls. The Ston wall is just behind the Great Wall of China, the longest in the world (5.5 km).  Among the city's castles, particularly notable are Veliki Kaštilo (Grand Castle) and Podzvizd, which offer a view of the town and the salt pans.  1,5 km walking from Ston, on the other side of the peninsula is Mali Ston village.

Mali Ston Bay, famous for its shellfish farming, especially oysters and mussels, is an unavoidable destination for true seafood delicacies lovers. A boat ride to the oyster farm and a tasting of this natural aphrodisiac straight from the sea, with a glass of top-quality Pelješac wine, make this place a real gourmet pearl. 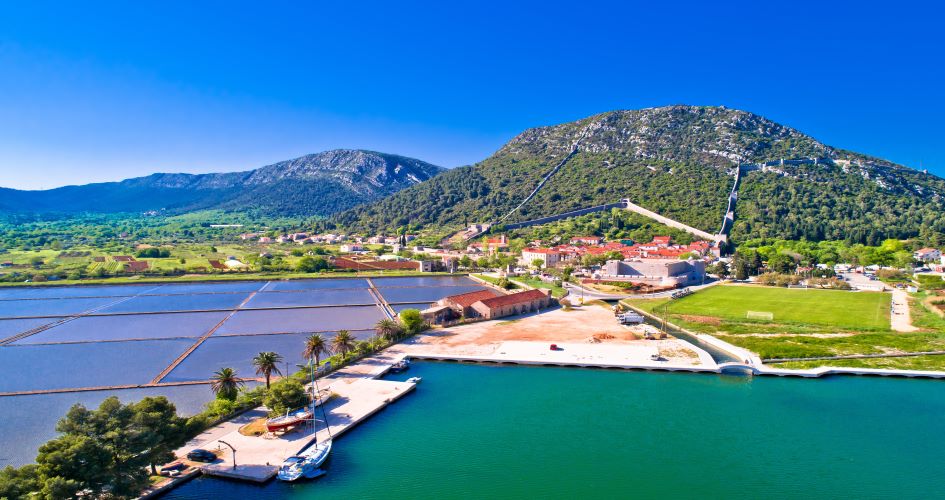 The island of Mljet is the most forested island in the Adriatic and one of the most beautiful pearls of the Mediterranean. Walk or bike around the lakes in the National Park or simply peacefully enjoy the pristine beauty of the surroundings. National Park Mljet makes up most of the island, and there are several villages, two saltwater lakes – Veliko and Malo jezero, and a Benedictine monastery on the island of St. Mary.

Polače village is one of the oldest settlements on Mljet. Cove Polače is an excellent anchorage and wide so that you will find a spot even in high season. In the village, there are markets, a bakery, restaurants, and all kinds of rentals (car, scooter, bike, kayak). 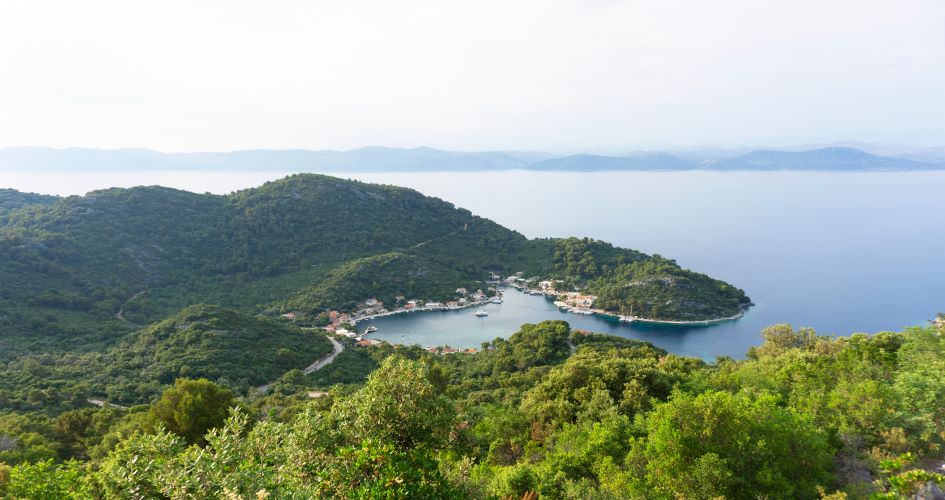 The synonim for Korčula old town is  “Little Dubrovnik.” This coastal citadel is dripping with history, with Medieval walls, marble streets, and a rich gastronomic scene. Tourist’s favorite hidden stop in south Adriatic. The city’s greatest attraction is the house belonging to the Polo family in which, according to legend, was born in 1254. Marko Polo – a Venetian writer, trader, and researcher.

You can stay in the ACI marina Korčula or anchor in one of the nearby bays. 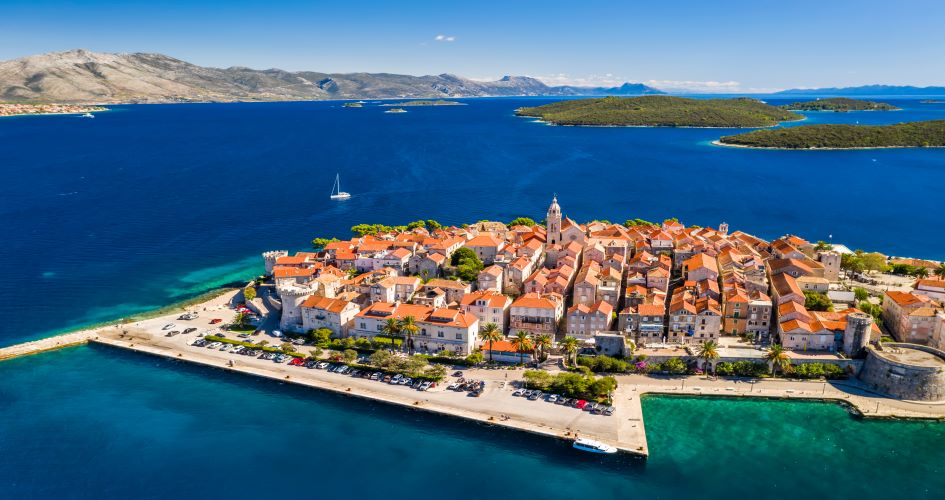 Vis Town is on the northeastern part of the island of Vis at the bottom of the deep-drawn and well-protected cove. It is one of the most famous sailing destinations on the Adriatic.

Traditional local dishes you can try in dozens of restaurants in the city or taverns, within the rural households around the city. Don`t miss tasting the local specialties of Vis bread and cake and pilchards from the grill.

Mountain climbing, cycling, or diving are available for active holiday lovers on the island of Vis. Especially popular on the island are military tours. The island had a role of a military base in former socialist Yugoslavia. Today, there are many remains, tunnels, and bunkers, open for visitors. 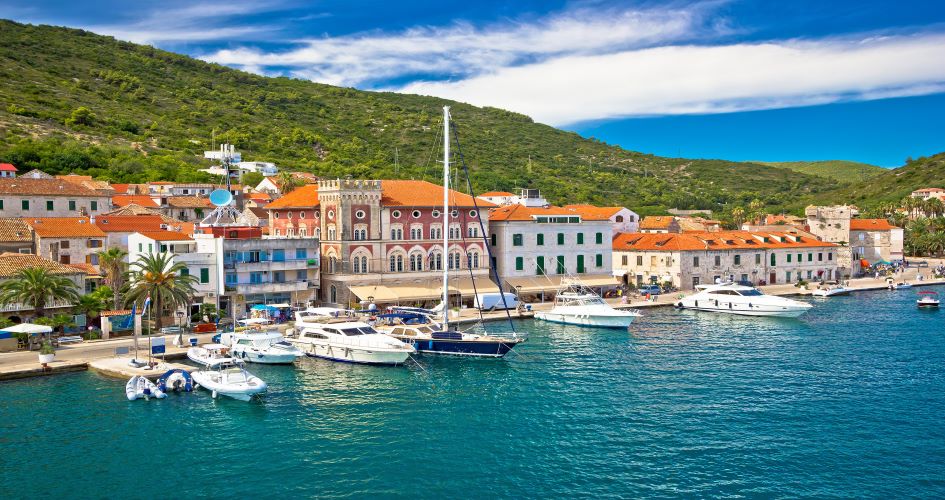 On Pakleni Islands you can find a berth in the  ACI Marina Palmižana or in anchorage bays with buoy fields, Vinogradišće, Taršće, Soline.

The southern shores of the Pakleni islands are leaving breathless. The contrast of the grey and rough coastline and the dense green forest is striking. The coast is rugged due to the strong southern winds and waves.

Besides the rocky coast on the south side are several gentle coves that are perfect for anchoring and perfect for daily swimming. The most famous are Vinogradišće, Taršće, and Soline. Vinogradišće is the most attractive as there are mooring buoys and a few restaurants ( Laganini, Zori, Toto`s, Bacchus). 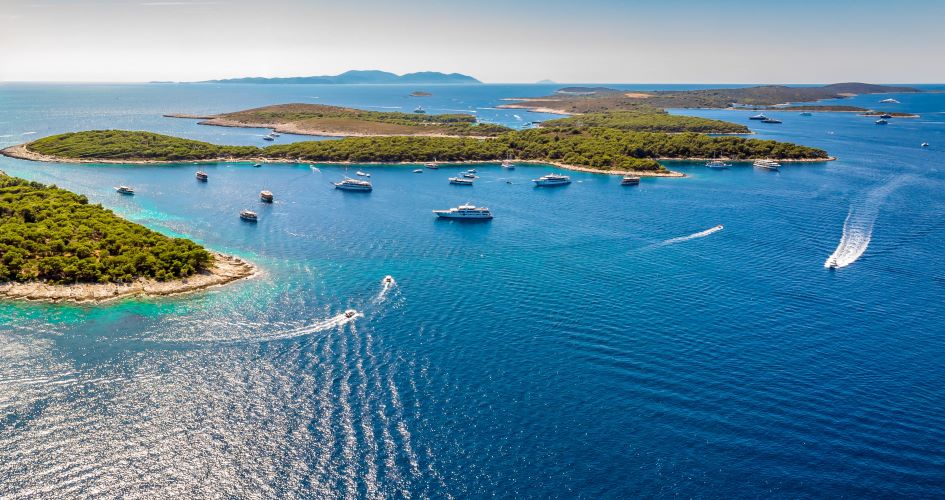 In the surrounding of untouched nature and the crystal clear sea of Tatinja Bay, you will find a true paradise. Tatinja bay is known as an anchorage, which makes it an unavoidable destination if sailing around the island of Šolta.

What to expect in Tatinja:  a fantastic day or evening, fulfilled with relaxed hanging around while swimming, snorkeling, and enjoying the traditional Dalmatian dishes. Lonely Paradise serves traditional Dalmatian cuisine, like “Peka”, fresh fish, and prosciutto. The well-kept stone house is in a natural bay surrounded by a nice pine forest. 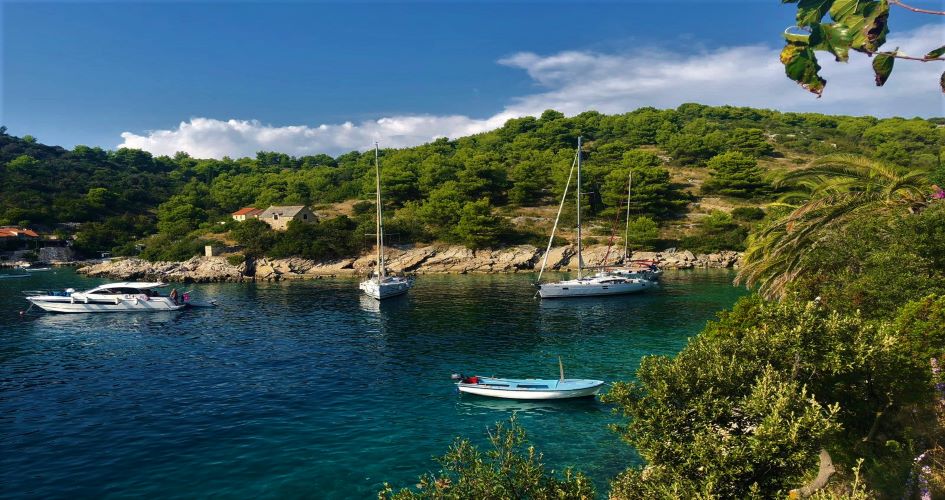 This historical town is just 10 minutes away from Split International airport with three nautical marinas in a radius of 3 km. These facts make it a perfect departure point for sailing holidays and cruising along the Adriatic Sea.

Trogir is one of the most beautiful Croatian small towns. The old city core is on an island, connected by one bridge to the mainland, and by another bridge to the island of Čiovo.

Since 1997. is under UNESCO protection. Well preserved city walls, doors, and palaces, several churches, and monasteries. St. John’s cathedral with masterpiece Portal of Master Radovan. The Romanesque art of Radovan’s portal describes the humanistic truth of redemption and shows us that good and love always outweigh evil.

This is just part of what you can expect to see in this charming little town of cozy narrow streets paved by yellow smooth stone. 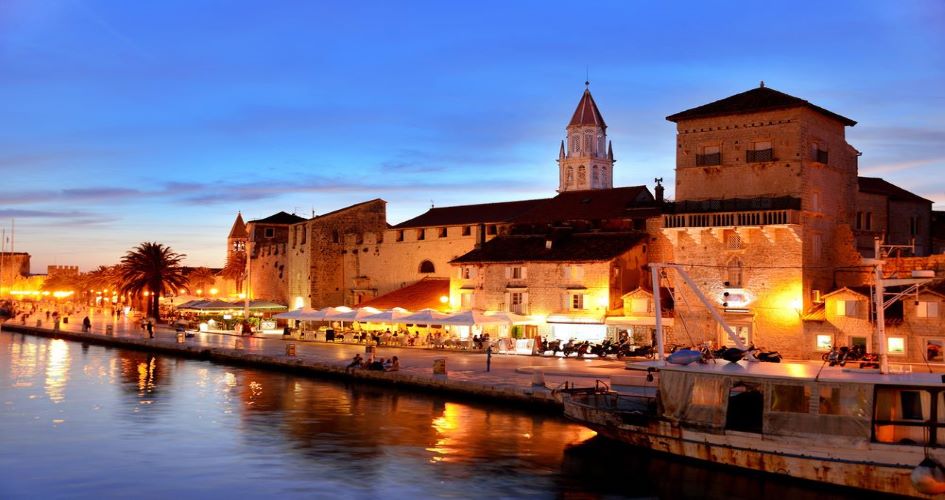 ONE WAY yacht charter is not a standard service, therefore count on a ONE WAY fee, which depends on the boat size and type.

In our online yacht search, you can check available yachts from Split or Dubrovnik, and we will reconfirm if ONE WAY sailing is available.