The sunniest and most extended Croatian island is the island of Hvar. Hvar belongs to the Middle Dalmatia region and is part of the Split archipelago. With an area of 299.6 km2 and a population of around 10 500. 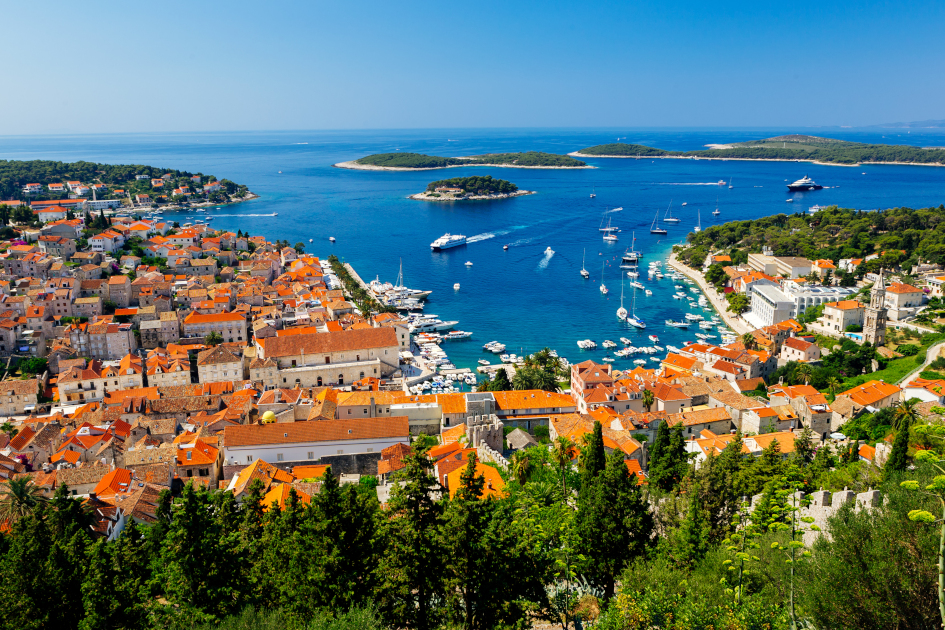 The traces of settlement date back into prehistory. Archaeologists found evidence of life on the island of Hvar dating back to 3500 BC. The unique prehistoric culture was called Hvar culture. In 385./384. BC, the Greeks from Paros Island in the Aegean Sea, set up a colony at the site of today’s Stari Grad (Pharos).

During the long and rich history, the island was ruled by Illyrians, Greeks, Romans, Croatian – Hungarian Kings, Byzantine Emperors, and Venetian Doges. After joining under the Venetian control, Hvar started rising. Due to its favorable maritime position, it became one of the most important cities of the Venetian Republic. After the Venetians, the island was under the government of Austrians, the French, and the Italians.

Hvar is an island of indented coast, crystal clear sea and scenic beaches, plenty of sunshine, untouched nature, a wealth of historical and cultural heritage. A pleasant Mediterranean climate with mild winters, pleasantly warm summers, and many sunny hours make a vacation and stay on the island delightful throughout the year. Lavender, olive oil, wine scents, and always hospitable hosts are the reasons the island of Hvar is well known. Lavender jam, which you can try in some restaurants in Stari Grad, is definitely an experience of taste that you should not miss. 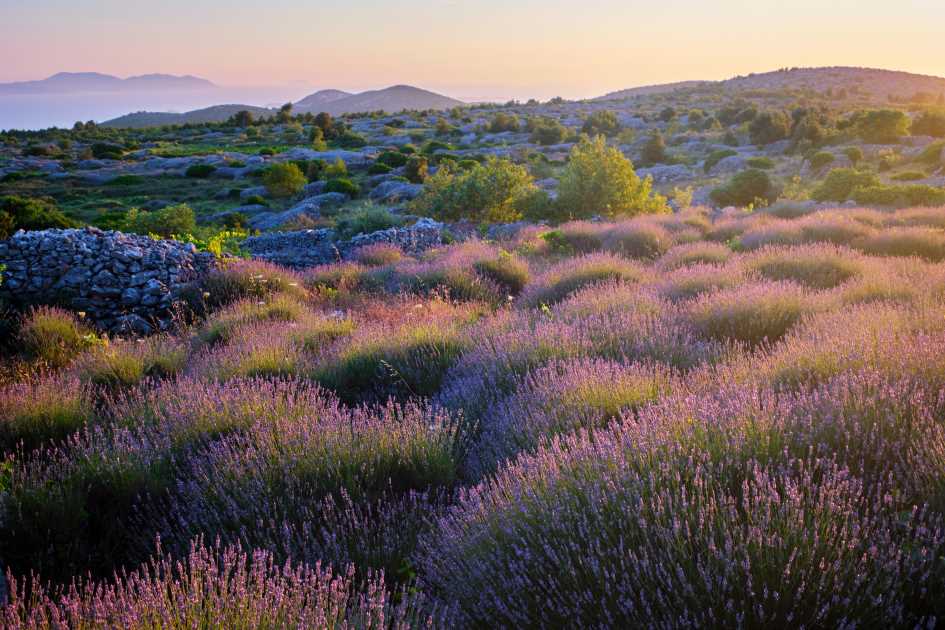 What Hvar is most famous for is vine growing and the production of top-quality wines. The island abounds in vineyards, both inland on fertile fields of Starigrad and on the steep southern slopes.

In ancient times, the southern slopes could only be reached by steep narrow paths. Due to the difficult road to the vineyards, settlements such as Ivan Dolac and Sveta Nedelja were established on the southern coast. Today, the road to the southern beaches is much easier thanks to the Pitve-Zavala tunnel.

With its microclimatic diversity, this pearl of the Adriatic is able to give magnificent wines of different styles of indigenous Dalmatian varieties, some of which we do not find anywhere except on Hvar. 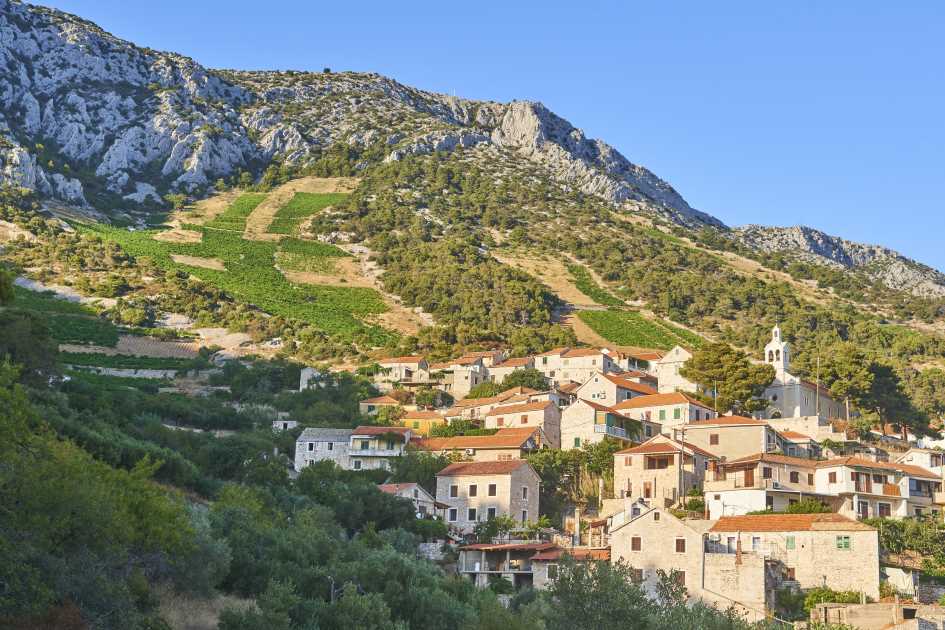 Settlements on the island

Hvar Town is in the middle of the south side of the island. It is an ancient city of rich history, culture, architecture, and beautiful nature.

Hvar is a city of unique cultural and historical heritage. The city of Hvar is proud of the oldest folk theater in Europe. The most famous sights are the fortress “Fortica”, the Cathedral of St. Stephen, Franciscan monastery, city loggia, Hektorović Palace, Arsenal Theatre.  Numerous galleries, museums, and exhibitions are available to visitors. Hvar has been built over the centuries by recognized domestic and foreign architects. On the walls and streets of the city is the most visible spirit of the Renaissance era. 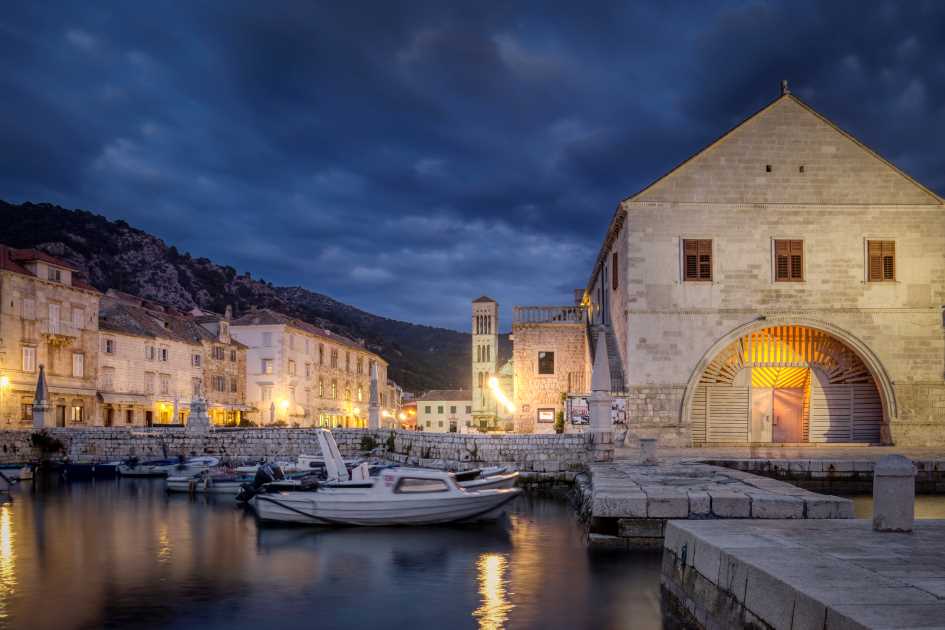 Port of Hvar is the favorite destination of the world’s jet-set who visits the city with their superyachts. Hvar is a place where you can come to see and be seen. The city abounds in top service restaurants and nightclubs for great entertainment.

During the high season, Hvar city harbor is basically reserved for superyachts. A great alternative is to find a berth or anchorage on the nearby Pakleni islands. 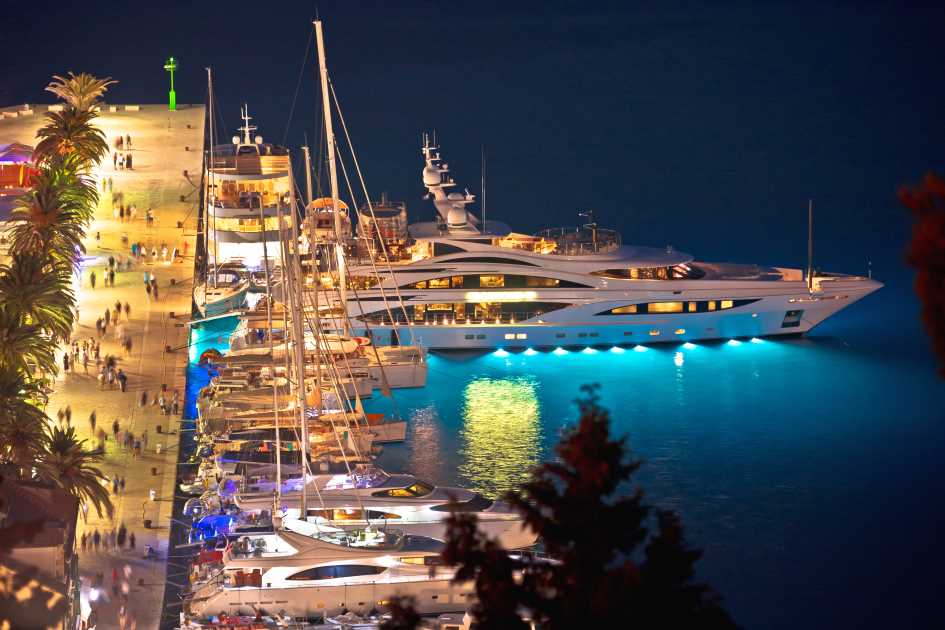 On Pakleni Islands you can find a berth in the  ACI Marina Palmižana or in anchorage bays with buoy fields, Vinogradišće, Taršće, Soline.

The southern shores of the Pakleni islands are leaving breathless. The contrast of the grey and rough coastline and the dense green forest is striking. The coast is rugged due to the strong southern winds and waves. Besides the rocky coast on the south side are several gentle coves that are safe for anchoring and perfect for daily swimming. The most famous are Vinogradišće, Taršće, and Soline. Vinogradišće is the most attractive as there are mooring buoys and a few restaurants ( Laganini, Zori, Toto`s, Bacchus). 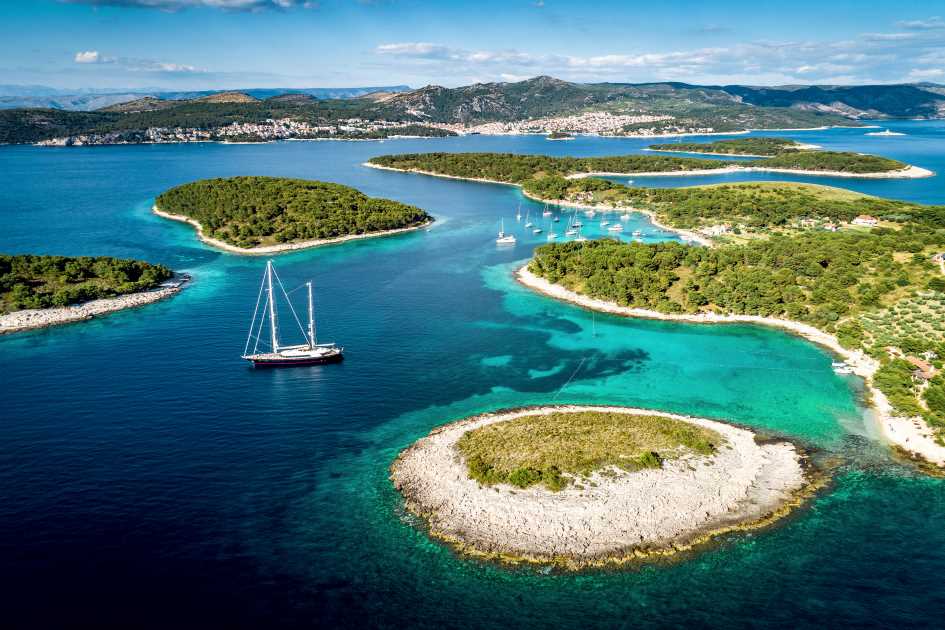 On the northern side of the island of Hvar is situated one of the oldest towns in Europe, and the oldest in Croatia – Stari Grad. Because of its central island position, for centuries it has been a refuge for seafarers and today one of the favorite sailing destinations to seafarers sailing on the Adriatic.

Stari Grad is an ideal sailing destination, perfect for long walks and strolls. Taverns and restaurants with healthy homemade food and traditionally excellent island wines will provide you with a vacation you will not forget.

At the head of a four-mile-deep bay, the city port offers excellent shelter in all conditions except strong W and NW winds, which can create a dangerous surge. The town quay disposes of around 60 mooring lines. Water and electricity are available all along the S quay. Alternatively, you can use one of 20 mooring buoys located approximately 50 meters off the N side of the port. 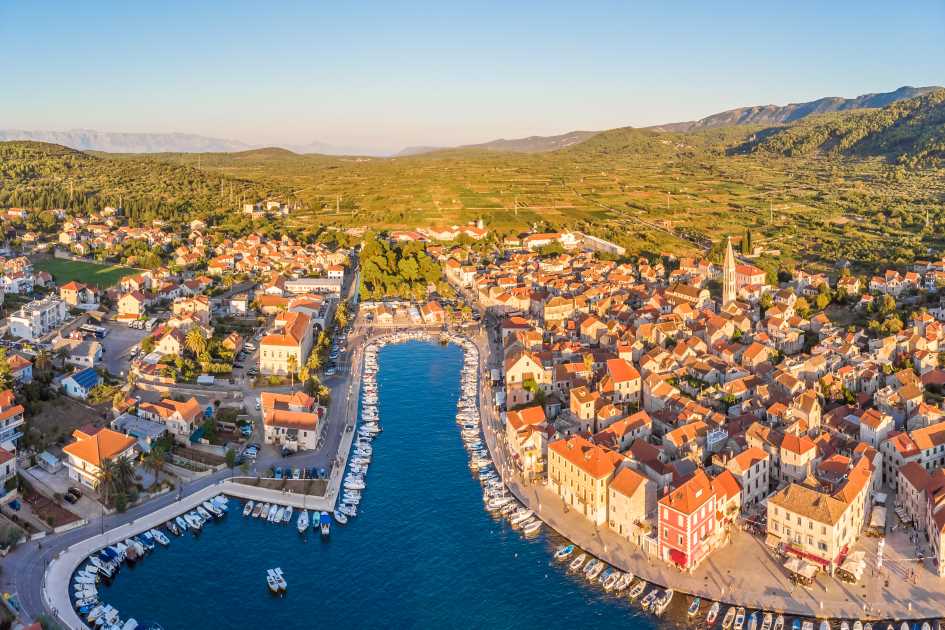 In the central part of the northern part of the islands is Jelsa, which is a famous tourist destination with a long tourist tradition.

In Jelsa, you can enjoy the pleasant walks along the coast, pine forest, shady woods, well-kept paths, and trails. Explore the picturesque villages scattered on hills and valleys full of Mediterranean vegetation and medicinal plants in which the rural architecture of narrow streets and squares is well preserved.

Jelsa and its surrounding area have a richly indented coastline with many coves and capes where every seafarer can find the right spot. City port in Jelsa disposes of 40 berths, equipped with power and water. 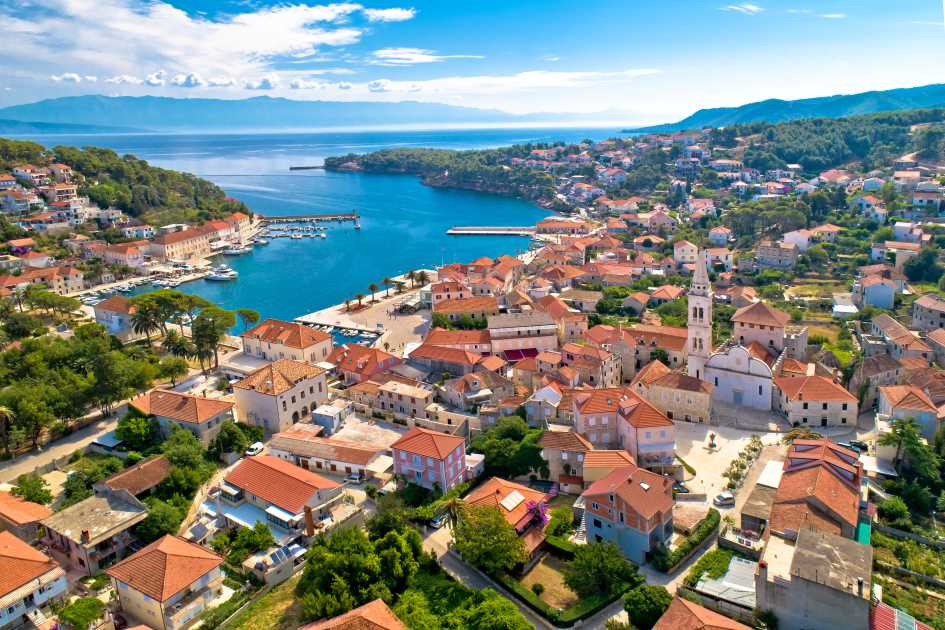 Vrboska is the smallest town on island Hvar. It is a peculiar town due to its geographical location hidden in the deep bay, intact dense pine forests, cultural sights with features of the Gothic, Renaissance, and Baroque style, and architecture flanked by winding streets. In the middle of the bay is a small islet, connected by the bridges, for which it is called ” Little Venice". The church-fortress from which spreads the beautiful view of the surrounding and open sea is a unique monument.

Cycling trails, along with the Starigrad Fields, stretching from Vrboska to Starigrad, are ideal for lovers of active holidays.

Also, popular exploring routes are to the south side of the island and villages Pitva, Vrbanj, and Vrisnik.

Although Vrboska is the smallest town on Hvar, it has the largest marina – ACI Marina Vrboska. Her location is at the bottom of the long narrow bay, which is why it is virtually the perfect harbor because of protection from all winds. 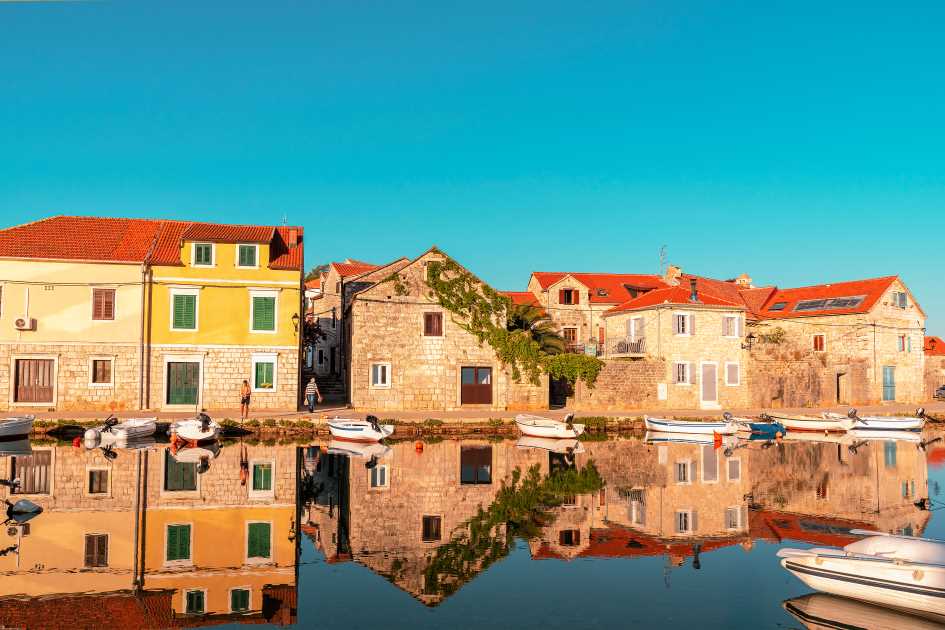 Sućuraj is a picturesque little fishing, tourist town, and port on the eastern tip of the island of Hvar, just 5 km from the mainland.

Untouched nature, lush vegetation, and many beaches are the main attractions.

Sućuraj abounds with palms, tamaris, pines, and other Mediterranean plants. Nearby are olive groves, vineyards, and very dense forests. It is surrounded by the sea on three sides and has over 25 km of coastline with many beautiful and picturesque beaches.

In the center of the town is a port with berths/ moorings, protected from all winds. Berths are equipped with power and water, toilets/ showers. 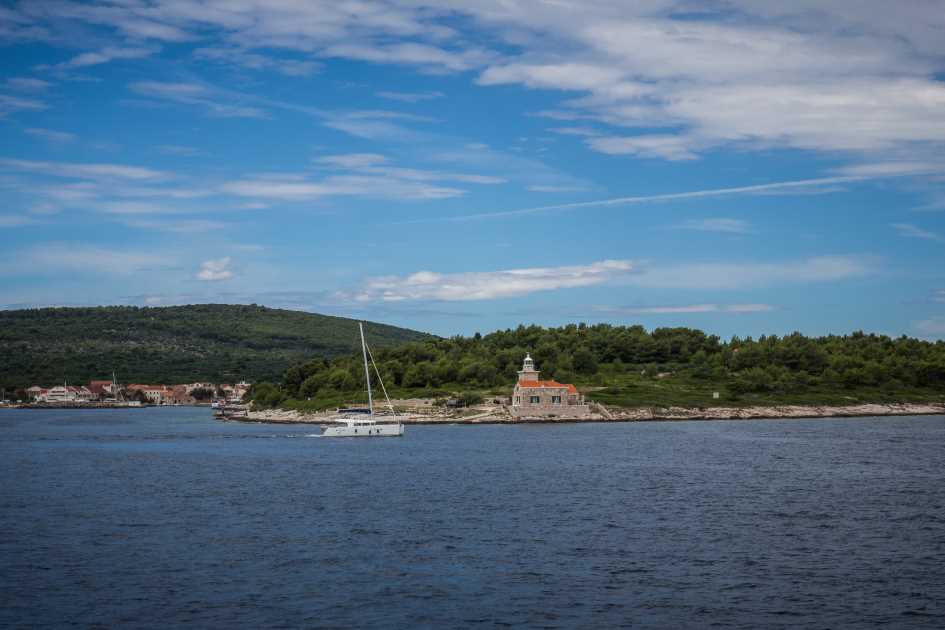