TOP 5 magical places to visit while sailing around Dugi Otok 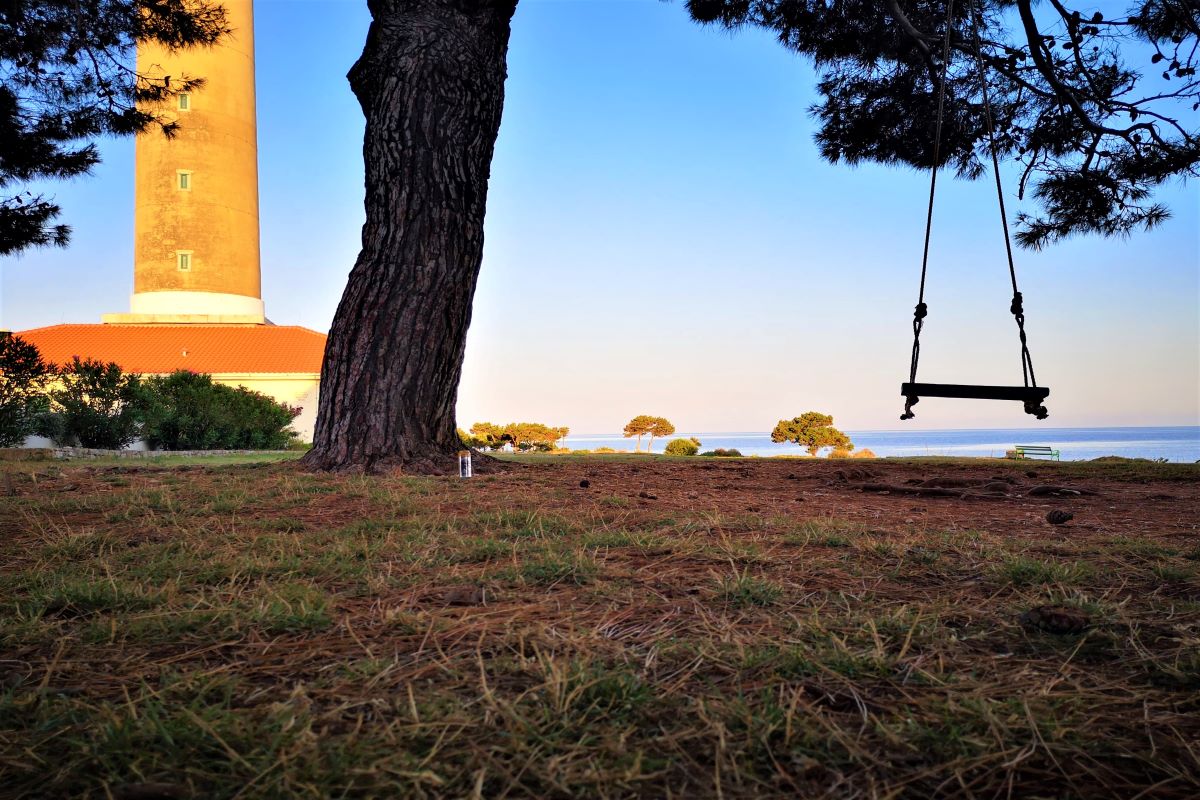 The island of Dugi Otok is truly a paradise for sailing and nature lovers, a perfect destination for a city escape,  recreation, sports, long walks, jogging, swimming, and diving.

On the western side of the island, close to Veli Rat village,  is one of the largest and most beautiful lighthouses in Croatia, the lighthouse Punta Bjanca. According to legend, the thick lighthouse walls contain thousands of egg-whites to make them more resistant to wind and sea.

Punta Bjanca is the highest lantern in the Adriatic and is 42 meters high. To all visitors looking for solitude and privacy, accommodation is possible in an apartment suite in the lighthouse. However, it is necessary to make a reservation ahead due to a high accommodation demand. In the courtyard of the lighthouse is a chapel of St. Nicholas, which can be used to organize a romantic wedding with a view overlooking the open sea. 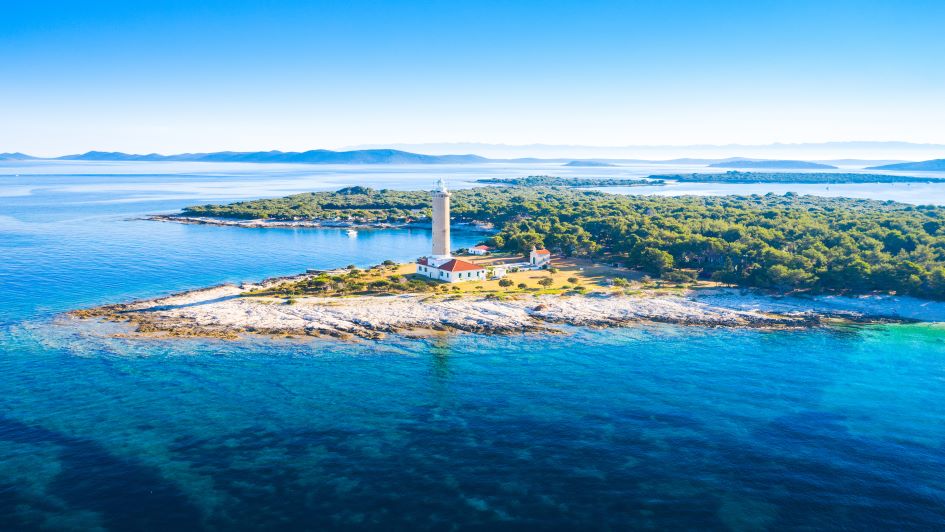 Pantera bay, which resembles a lagoon, is the most popular anchorage on the NW side of Dugi Otok.

On the south side of the bay, there is a marina Veli Rat. South of the marina is a narrow passage marked with floating buoys that allow safe navigation in the bay's southern part. The southern bay is just a short walk from Sakarun beach.

In the case of strong Jugo (S wind), we recommend berthing in the bay's southern part. 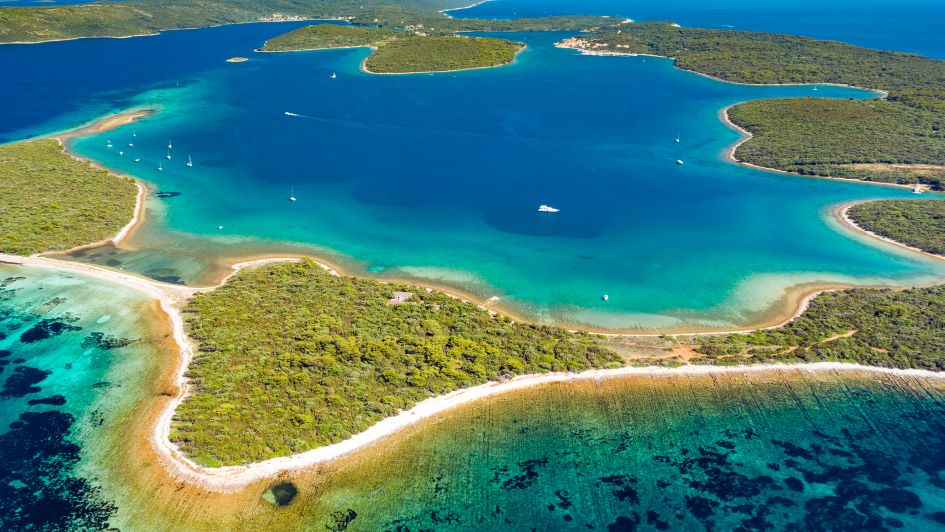 North of the Pantera bay in the shallow water is a shipwreck of the Italian cargo ship "Michelle." It ran aground north of the Veli Rat lighthouse on Dugi Otok in May 1983. The islanders say the crew stranded him on purpose. The ship was for a good part above the sea for years, but it sank more and more with time.

Due to its shallowness, it is an excellent attraction for less demanding dives. If you want to see the ship up close, you can securely anchor; the depth is around 3 meters.

On the east side, in Lučica bay, there is also a sunken ship in shallow water. The wreck lies in the west part of Lučica bay on water depth from 2 to 4 m. 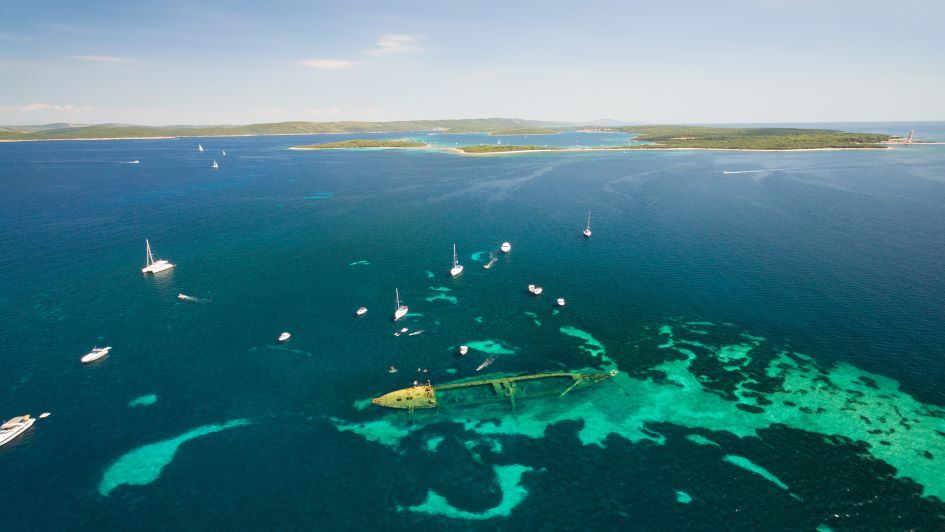 Sakarun beach is a sandy paradise, one of Croatia's most famous beaches, located on the northwestern coast of Dugi Otok, close to Veli Rat and Božava. The beach gained its reputation with the sand's whiteness and clean sea, surrounded by pine trees that provide a welcome shade in the summer. It is about 800 meters long, and at some 250 meters from the shore, it is 3.5 meters deep. The bathing area is vast and shallow. If you are sailing around Dugi Otok, Sakarun is a must-visit, especially if sailing with children.

The bay provides adequate shelter from Bura and Tramuntana. However, when Jugo is blowing, the bay is completely exposed and has to be left early. There is a buoy field in the bay, for which, in high season, a reservation would be advisable. There are two bars on the beach, offering refreshments and light snacks. 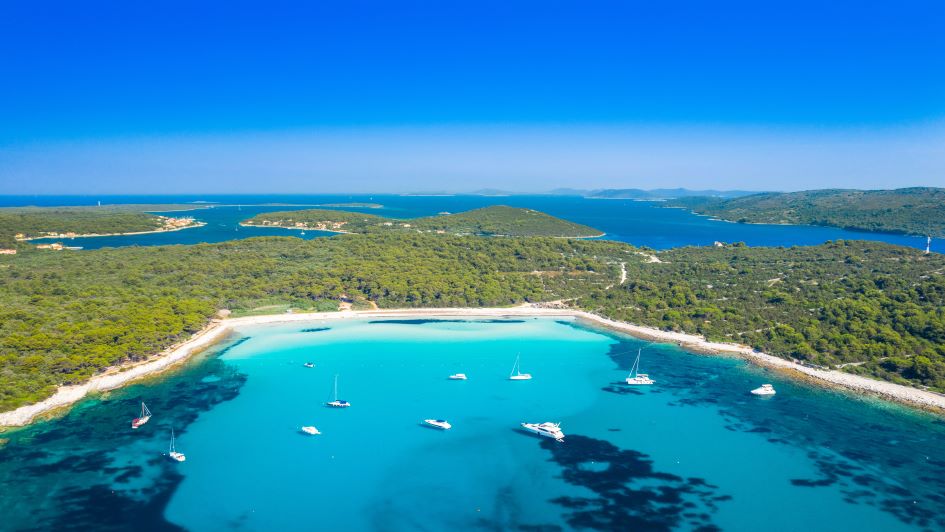 Southwest of the village Brbinj is the Brbinjšćica bay, surrounded by mighty cliffs and numerous caves, one of the safest anchorages on Dugi Otok facing the open sea. A secluded bay known to the few who know how to locate it, Brbinjšćica is an excellent diving spot as well.

It also hides other natural beauties, of which the Golubinka cave stands out. Golubinka is located about 300 meters from the entrance to the bay Brbinjšćica to the northwest. However, land access is not easy. The journey over the rocks ends on a small plateau where you can jump into the sea just before the cave entrance. A few swimming or kayaking meters bring you to the hall with glittering arches and a beach from fairytale movies. The peculiarity of Golubinka is its spread under and over the sea with the entrance above the sea surface. Here is recorded the largest bat colony on the island with over 3000 individuals and the largest habitat of sea sponges with 50 different species. Golubinka is worth every effort.

The western shores of the island, which do not yet belong to the area of ​​the Telašćica Nature Park, are full of surprises and the reason why Dugi Otok is considered one of the most beautiful islands in Croatia and the Mediterranean. Here the shore is gravelly and rocky, perforated and intersected by notches and cavities.

If you would like to add Dugi Otok to your Croatia sailing itinerary, you can charter a sailing yacht, catamaran, motor yacht, or gulet from the coastal marinas in Zadar, Šibenik, Trogir, or Split. 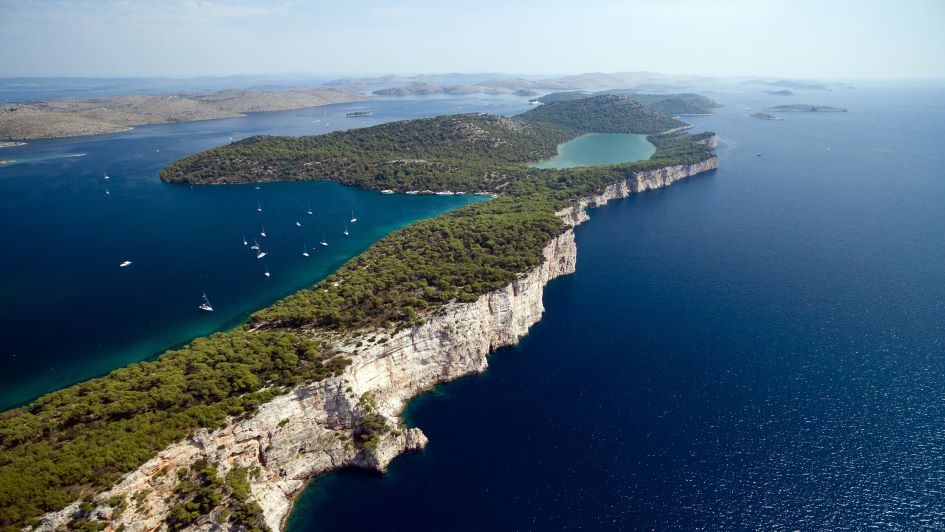