Sailing around the island of Mljet

15 NM sailing NW from Dubrovnik discover one of the most beautiful and forested Adriatic islands – Mljet island. It covers the surface of 98.01 km² and has a population of around 1 100 people.

Untouched nature, the island's mysticism, olive groves, vineyards, and rich forests are ideal places to research the rich flora and fauna. For all wanderers in search of a peaceful enjoy in the pristine beauty of the natural surroundings, Mljet island should be on the bucket list. 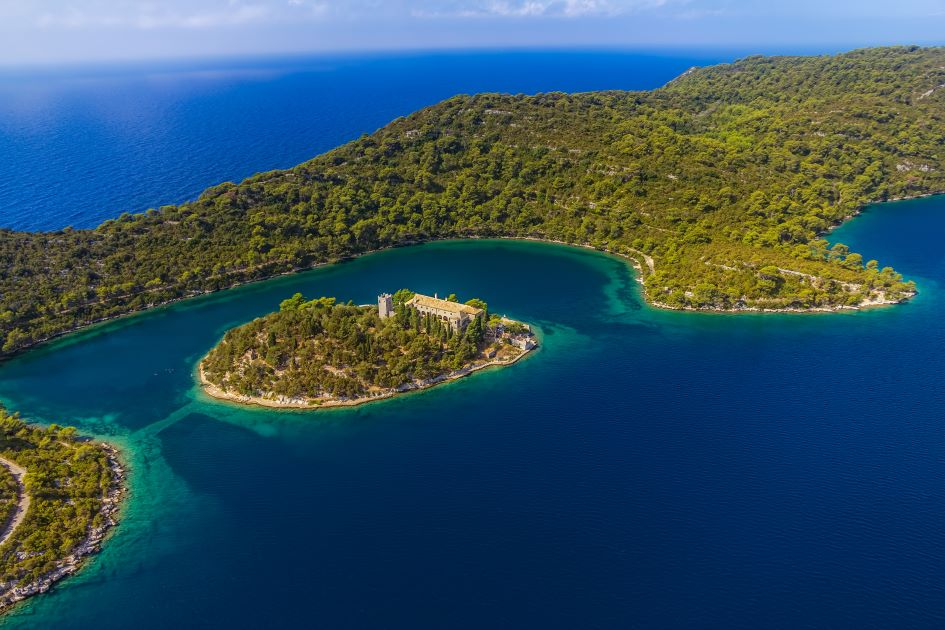 National Park Mljet makes up most of the island, and there are several villages, two saltwater lakes – Veliko and Malo jezero, and a Benedictine monastery on the island of St. Mary.

One wonder of Mljet is St. Mary's monastery on a small islet in the Veliko jezero (Big Lake). An island within an island, the sanctuary is a breath-taking piece of 12th-century architecture that the Benedictine order has guarded for nearly a thousand years. 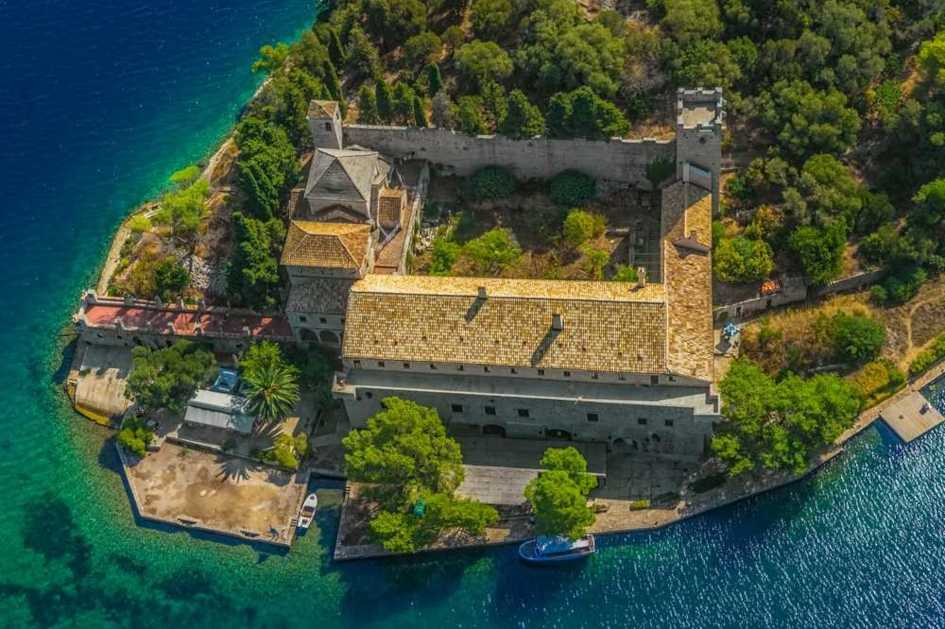 The St Mary's island is easily reachable by taking boat line leaving once an hour in summer, from Pristanište, Mali Most or Soline. Alternately, you can rent a sea kayak or small rowing canoe and easily paddle there in about 40 minutes. 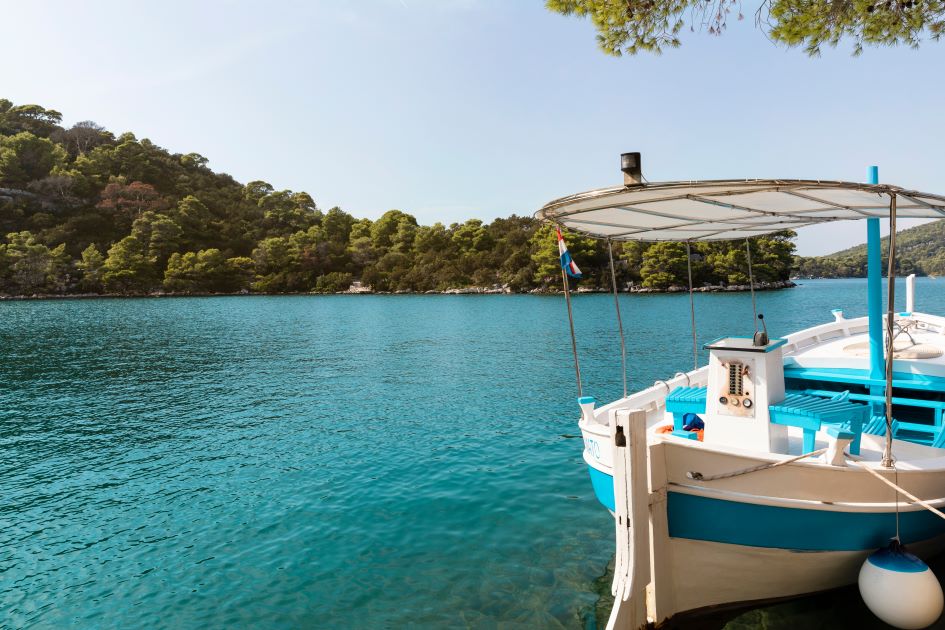 Villages and the anchorages on the island

Villages that are within the National Park are protected. The most notable of them is Goveđari, a small settlement that got its name from the word “govedo”, meaning cattle.

Goveđari is traditionally focused on land, viticulture, and olive growing, so if you want a quiet and peaceful holiday with homemade food, Goveđari is the ideal choice. There is only the administration of the National Park Mljet, post office, parish church with a parish court, and several houses in the settlement.

The village is connected by road with Pomena, Polače, and Veliki Jezero, and the only place in the National Park that is not on the sea. 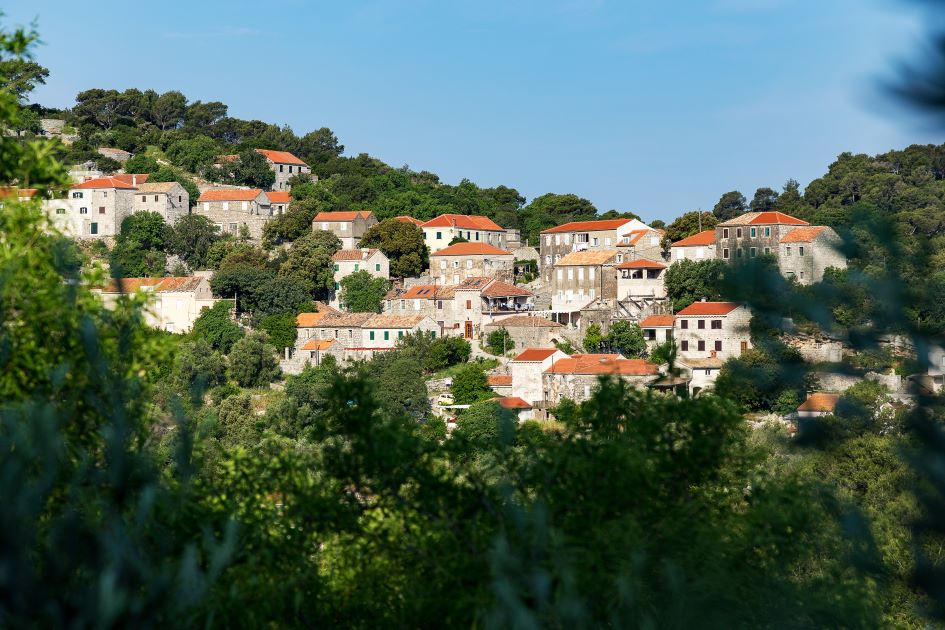 Saplunara is the most famous and beautiful bay with a sandy beach on Mljet Island's SE side.  The sandy beaches of Saplunara are divided into Velika and Mala Saplunara.

It is one of the most popular anchorages on the southern Dalmatia sailing itinerary or One-way sailing route from Split to Dubrovnik or the other way round. In the bay, there are available 15 mooring buoys. The bay is perfect for anchoring, especially when sailing with the children.

If you want to stay overnight, pay attention to prognosis, as if it turns to the south winds (jugo), you might not get out of the bay in the morning.

Few restaurants are offering a buoy free of charge if you have a dinner in the restaurant. There are few local markets in the bay. 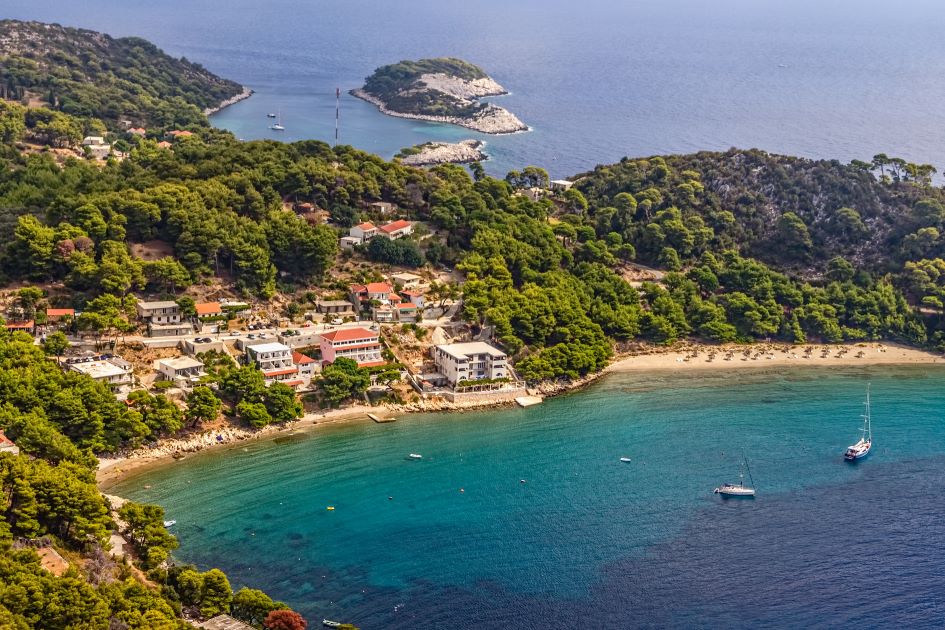 Saplunara bay is well known for its lovely beach and Blaca lagoon (Limuni beach), just SE of Saplunara.  Limuni is a sandy beach with an almost closed passage to the open sea that looks reminiscent of a lagoon. 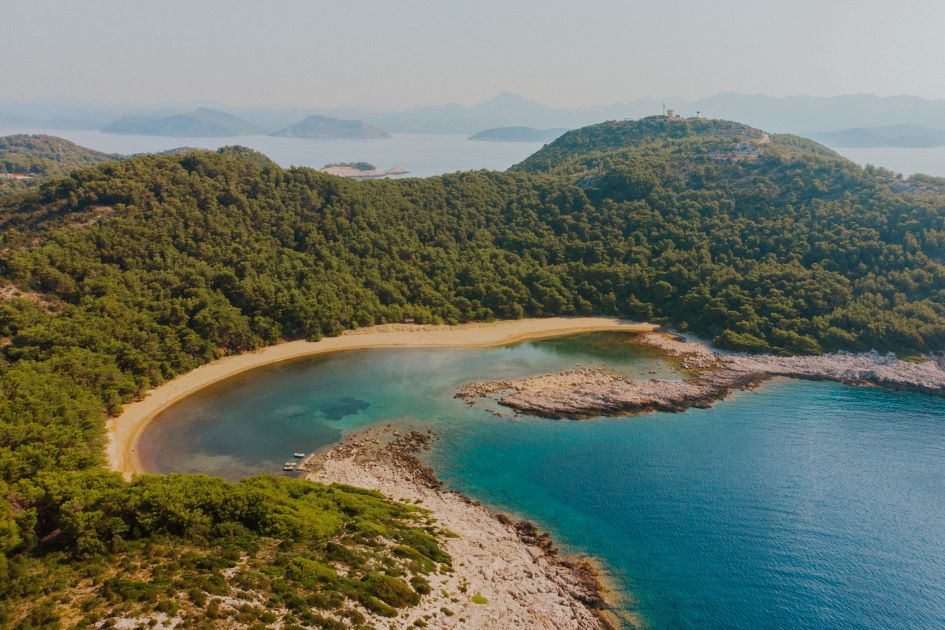 Sobra is a ferry port with a gas station. Ideal stop if you need to pick up someone on Mljet or refill fuel and water.

Okuklje was formed during the Republic of Dubrovnik rule when relative security from pirate attacks was established at sea.  In a time of peace from pirate attacks, Okuklje developed into a port from which merchants sailed daily to Dubrovnik, selling their wine, fish, and wood. Today, Okuklje is a frequent target of boaters, and in the past, it was the target of pirates and hajduks who burned the place several times and forced the inhabitants to flee back to the interior of the island.

Okuklje is one of the favorite sailing destinations due to its natural protection. It is a perfect anchorage with plenty of moorings in front of the restaurants and protected from all winds. 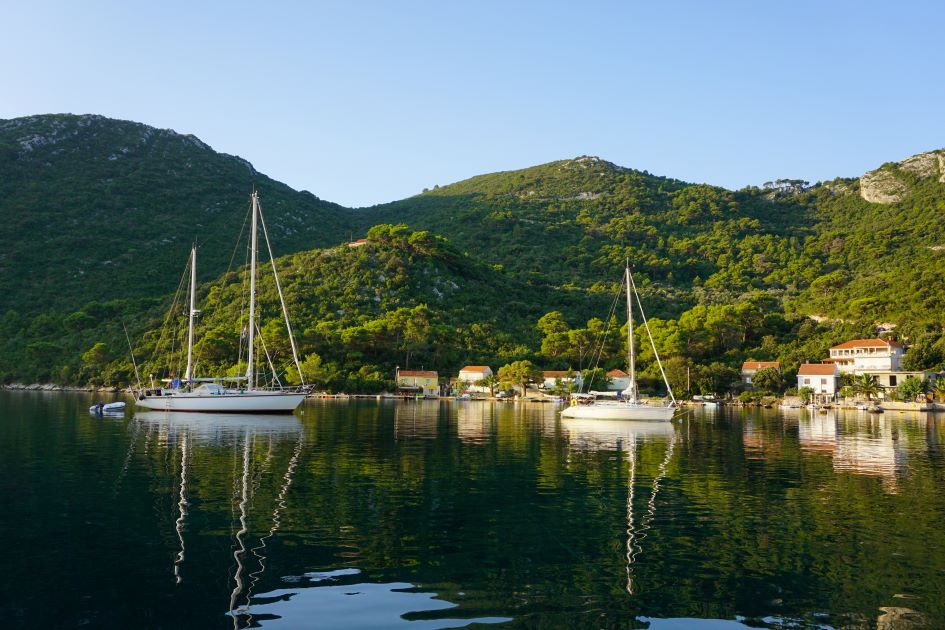 Pomena bay is a part of the National Park Mljet, located on the W coast of the island, protected by four islets. The village was inhabited in ancient times, which shows the remains of the Roman villa.

Fishers from Goveđari gave the foundations of today's settlement. They made small magazines in Pomena in which they stored their fishing tools and nets.

In Pomena, there are classic commercial berths with water and electricity. Several restaurants provide moorings to their visitors. From Pomena, you can walk along the walking trails to Veliko and Malo jezero. 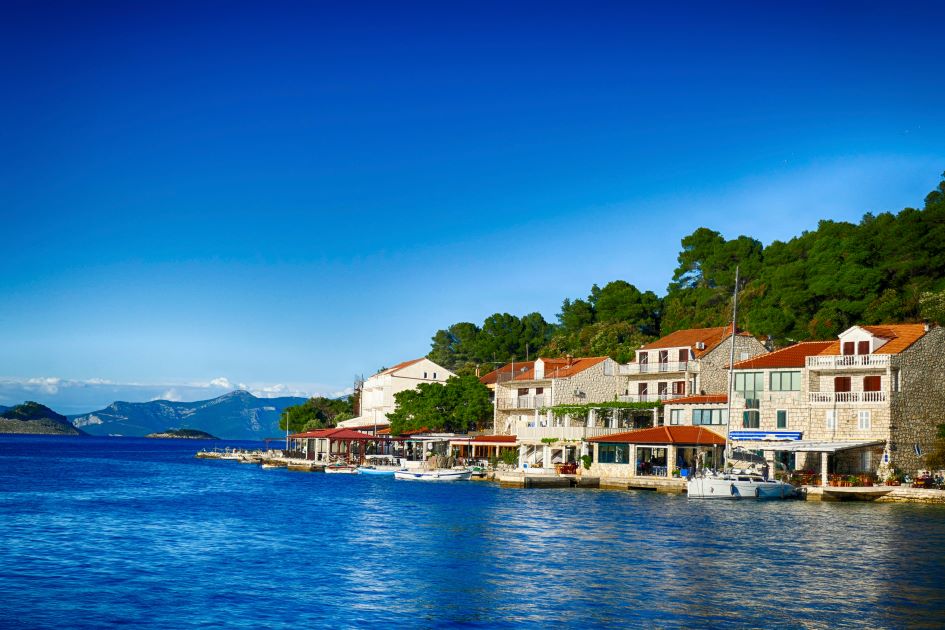 Polače is one of the oldest settlements on Mljet. The village got the name after the Roman palace, which served as the beginning of the settlement's creation.

In the 3rd century, the Romans built a summer house in the bay, which was completely protected from the blows of any winds, but the proximity and source of drinking water, which still exists in the place, were crucial for choosing a location to build the palace.

Cove Polače is an excellent anchorage and wide so that you will find a spot even in high season. In the village, there are markets, a bakery, restaurants, and all kinds of rentals (car, scooter, bike, kayak). 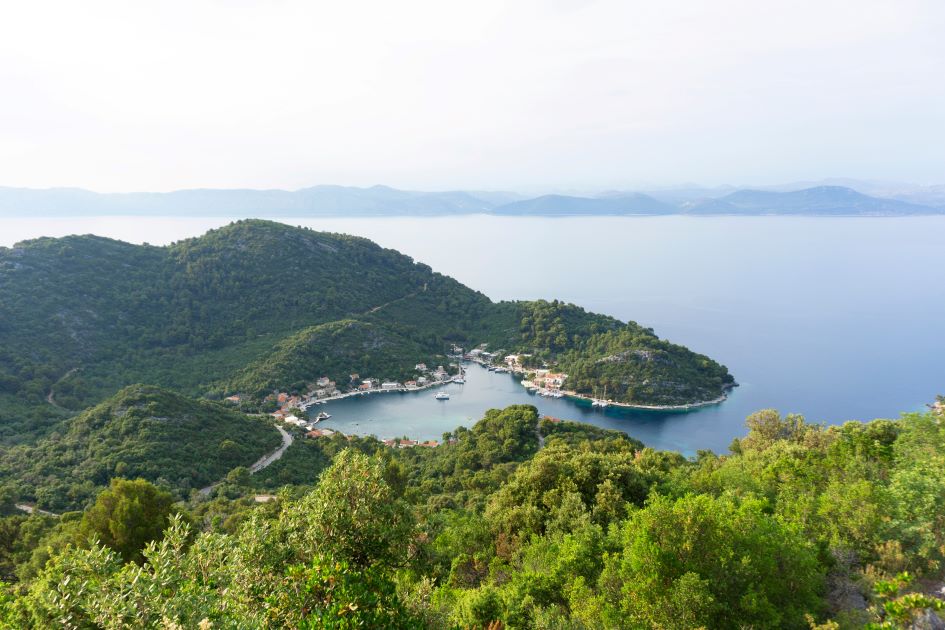 Prožurska luka is an old fishing village, on the N side of the island, with less than 50 inhabitants. The traditional fishing vessels (gajeta) and boats used to be built and repaired in Prožurska luka.

Prožura bay is protected by the island offshore island of Planjak, and two smaller islets. Due to its exceptional natural shape and protection, the bay is one of the favorite sailing destinations in the South Adriatic.

There is no market in the village, but you can find two restaurants, a souvenir shop, and a car/scooter rental. 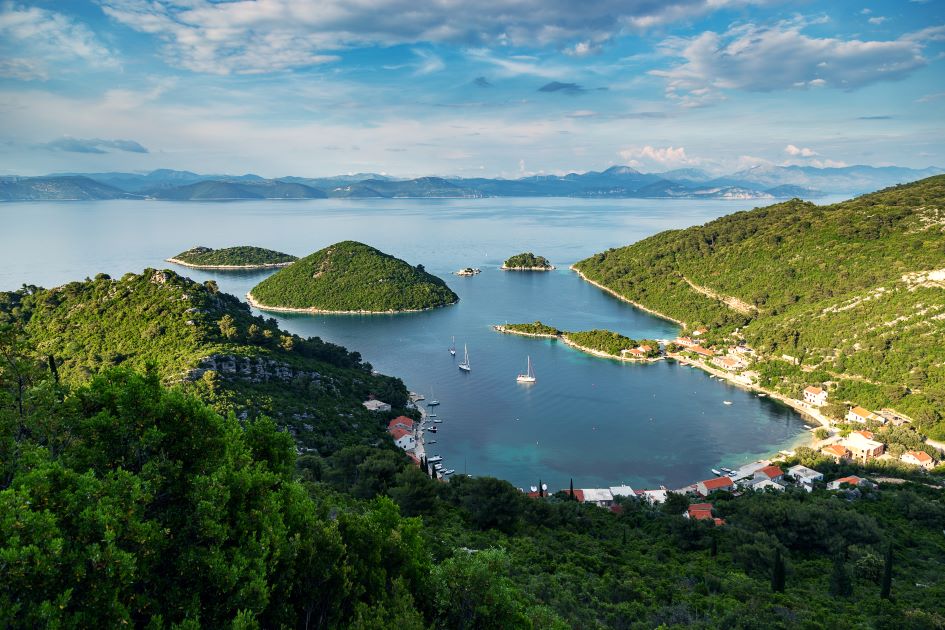 Mljet has long been known for the excellent gastronomy that the Romans brought with them, after which the abbots nurtured it on the island of St. Marija, and today it is presented to its guests by island restaurants and taverns.

A special place in Mljet's gastronomy belongs to eels caught in Mljet's blatine.  Blatine are natural brackish lakes located near Blato, Sobra, and Prožura. There, eels are traditionally made by grilling, cooking in broths, and other ways.

Besides the fish delicacies, the meat is excellent too. Goats grown on the seashore feeding on medicinal grasses on cliffs are a unique specialty. Mljet forests are rich in wild animals, the most numerous of which are wild boars, deer, mouflon, and wild rabbits, and their meat is prepared in various delicious ways.

All food specialties are followed by a good wine from the cellars of island winemakers, top-quality olive oil from Mljet olive groves, and various aromatic herbs that grow at every step. 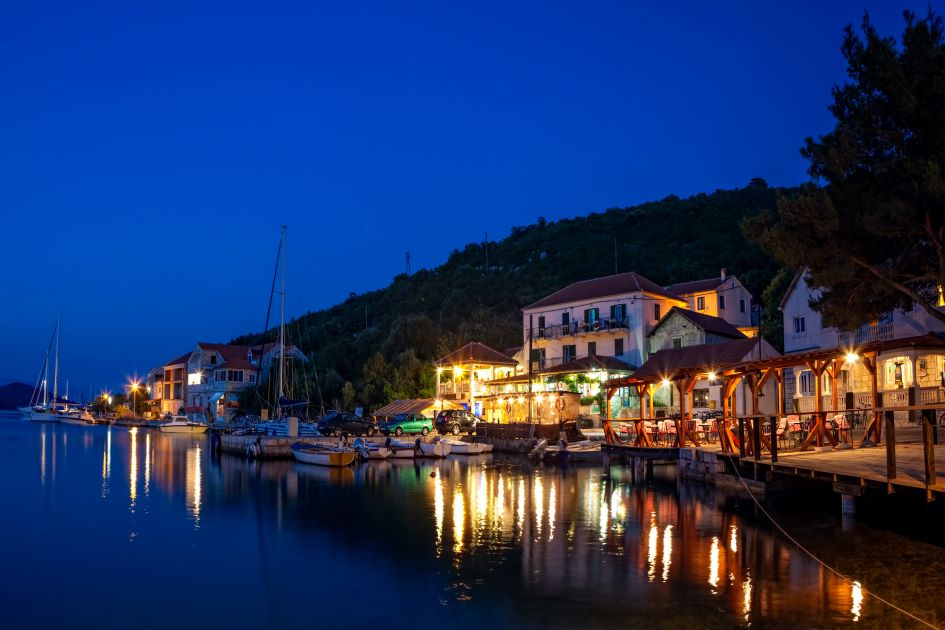