The island of Ugljan, known as "green island", belongs to the Zadar Archipelago. Usually, it's a first stop on the sailing itinerary from Zadar. It is the 14th largest among Croatian islands and the 4th largest among Zadar islands.
The Zadar Channel separates it from the mainland on the east, and the Middle Channel, from the eastern islands. The Pašman bridge over the Žrdrelac passage, in the southeast, connects it with the island of Pašman.

Warning: if passing under the Pašman bridge with a sailboat is part of your sailing itinerary, be careful. Before sailing out of the charter base, check the height of your mast. The mast's height must not exceed the bridge's height during high tide (16.5 m). The passage under the bridge is wide enough for one sailboat, and right of way is given to vessels approaching from the southwest. If you are unsure about the mast's height, don't push your luck unless you want to end up in the news. 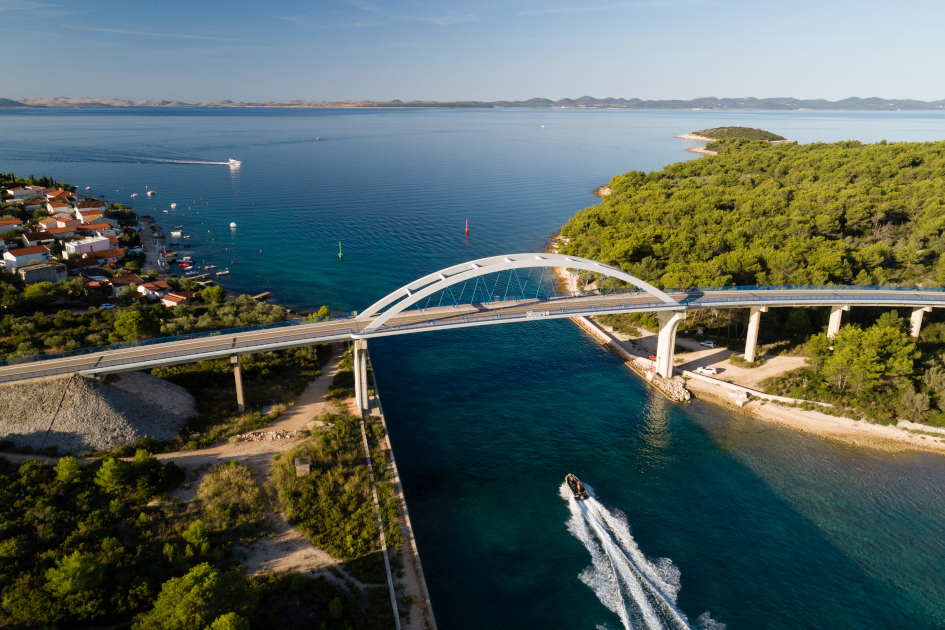 Lush Mediterranean vegetation covers the entire island, whose scents you can feel the first moment you step on the island. Relatively densely populated, especially on the north-eastern coast.

There are 7 villages connected by a narrow road: Preko, Kali, Kukljica, Poljana, Sutomišćica, Lukoran, and Ugljan. These places are characterized by the Mediterranean spirit and nature, rich cultural and historical heritage.

You can explore the island along its biking trails through the picturesque villages and natural bays, coves, and secluded corners by boat. 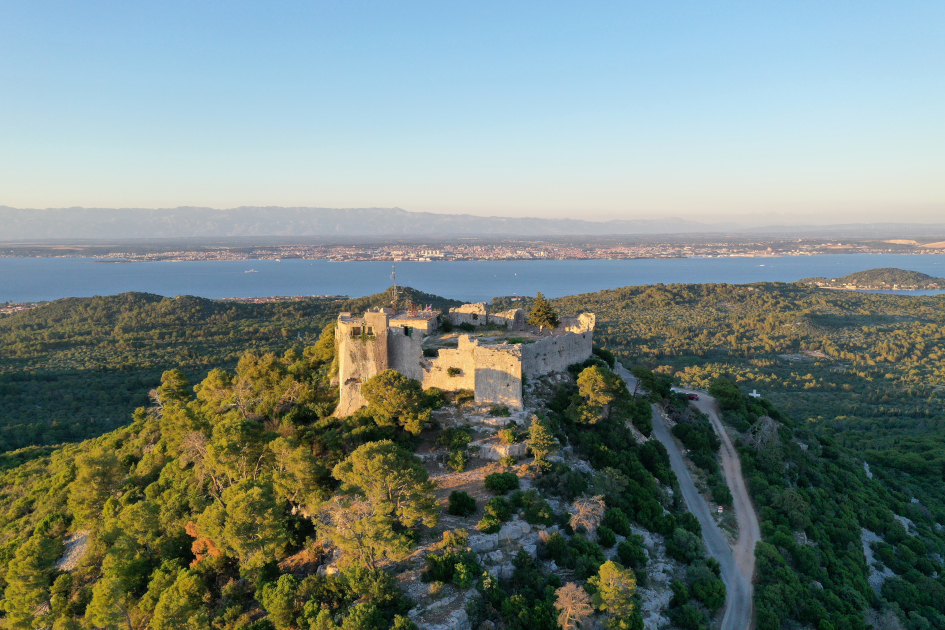 The town of Preko is the administrative center of the island and the ferry port. In the town center is located Marina Preko, which offers all the facilities you might need on your sailing vacation. In the center, you can find restaurants, shops, the marketplace, the infirmary, the pharmacy, the post office, etc.

Školjić or Galevac is a tiny island only 85 m from the mainland across the town of Preko. The island has a circumference of 650 m, and due to its size, it belongs to the smaller islands of the Zadar archipelago. You can reach the islet by taking a rowboat and ride with barkajol – the boatman of Preko. There is a Franciscan monastery built in the 15th century. 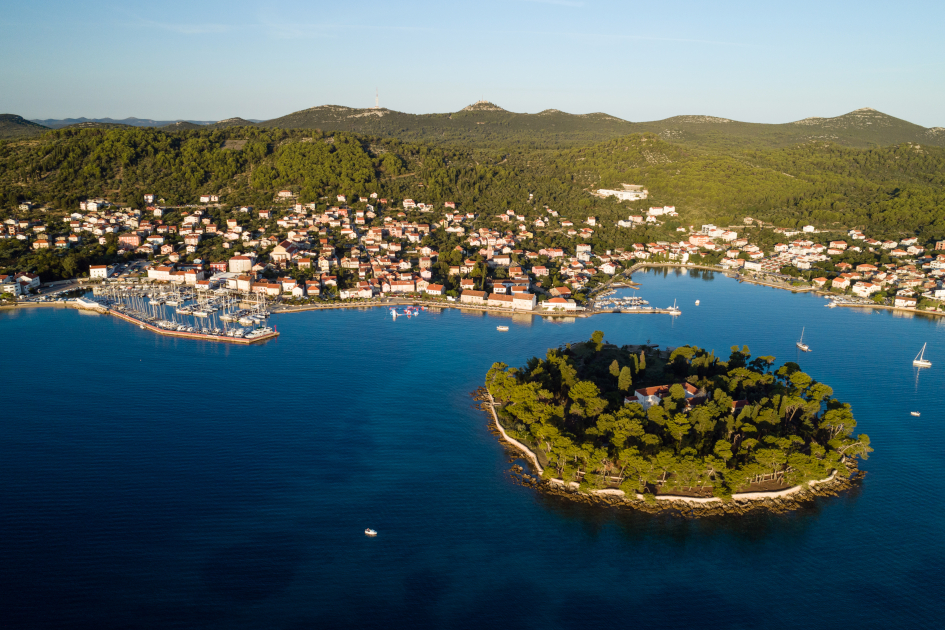 Ugljan is the largest town on the island, located in the north-western part of the island, which has the most sunshine hours in the entire Zadar area due to its relief characteristics.

On the cape, which closes the port on the north side, there is an old Franciscan monastery from the 15th century with a single-nave Gothic church from 1447. Interesting. There are several summer houses of Zadar noble families in the village. Remains of a Roman villa were discovered along Batalaža Bay. Southeast of the village, on the Koran hill, are the remains of a prehistoric hillfort.

400 meters noth from Ugljan is Soline bay. The small port offers a berth for only 3-4 smaller vessels. The depth of the sea inside the port is only 0.2-1 m. In front of the port you can anchor at depths between 1.5 - 4. The bottom is sandy, rocky in the eastern part. The anchor holds well. The port is protected from all winds except the south. 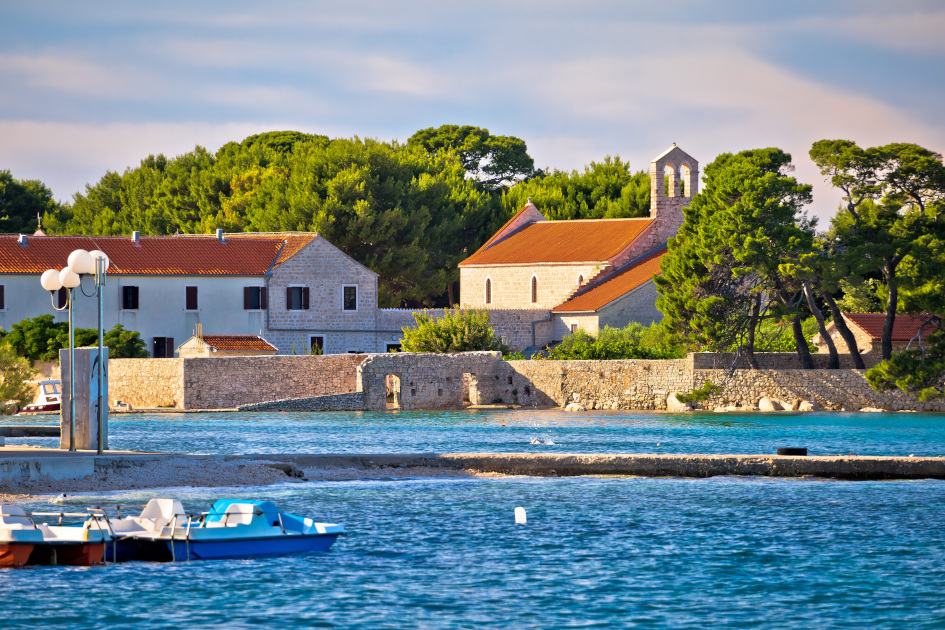 Kali is a place which gave the most famous fishermen on the Adriatic, who have shown their fishing abilities and seamanship on the world's seas. The two little ports are full of fishing-boats and fishers on the pier, occupied with patching up their fishing nets.

Kali is also known for the speech used there, which is full of diphthongs, ancient Glagolitism, farm labor, olive growing, fishing, and general life on and with the sea.

The old core of the town consisting of little narrow streets and houses made of stone in the Dalmatian style is situated on a hill. Here you can enjoy a magnificent lookout of the surrounding area. 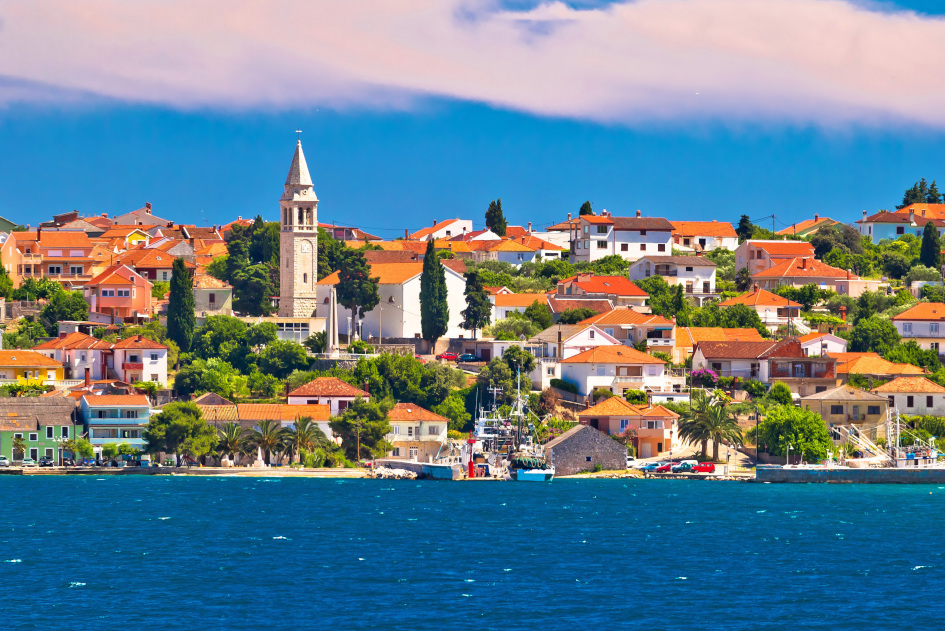 Kukljica is a historic, picturesque tourist and fishermen's village located on the southeast coast of the island of Ugljan, overlooking the island of Pašman. Kukljica is often referred to as "the gate to the National park Kornati and Nature park Telaščica" due to its proximity to the Ždrelac Passage. Kukljica has 650 inhabitants, mostly oriented to see, seafaring, and fishery. On August 5, our Lady of the Snows' traditional boat procession is held.

The stone houses are characteristic of the village's old part, separated by a natural bay from holiday park Zelena Punta. Zelena Punta is a natural oasis, overgrown with pine forests that borders rocky and sandy bays and macchia, olives, and figs.

You can enjoy the traditional dishes and Dalmatian specialties in the local taverns and restaurants.
If you pass by Kukljica on a yacht or catamaran, we recommend taking a break here. A harbour with 100 berths, equipped with water, power, and showers, is located in the village's center. 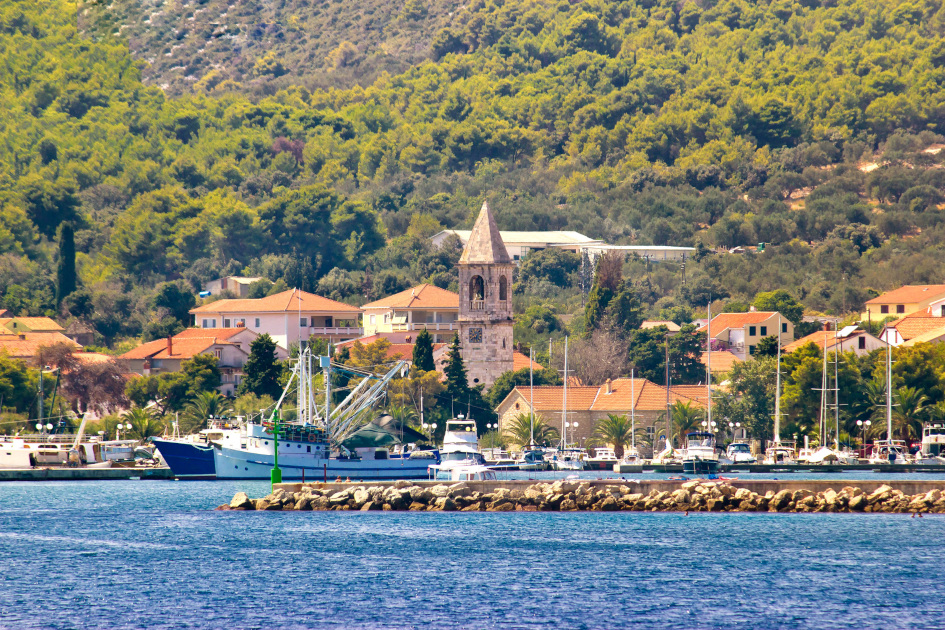 Sutomišćica is the largest and naturally protected bay on the island's east coast.

Together with its parish church of St. Euphemia, the village has been mentioned since the middle of the 14th century. The Baroque church was built in the 17th century. The Lantana family's summer house from 1686 with a chapel and a spacious park is an example of a Venetian-type baroque castle.

The professionally equipped football field in the center of Sutomišćica by the sea is the pride of the island football club St. Michael. To the southwest of the village is the Vela Glava hill (238 m), offering a magnificent view of the Zadar archipelago and Ravni Kotari.

Together with its Olive Island Marina, Sutomišćica is one of the Zadar region's favorite sailing destinations. 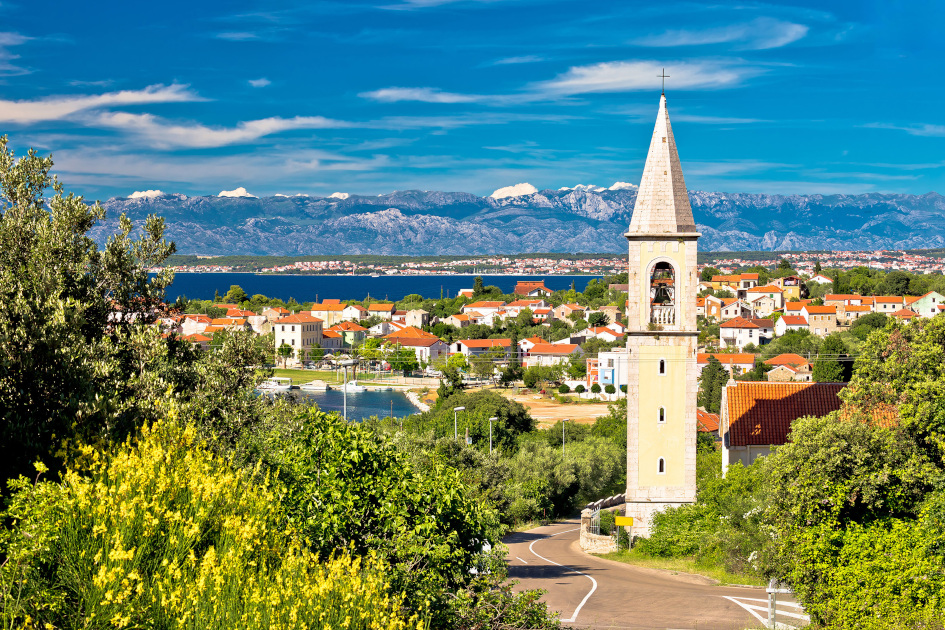 Due to the extraordinary diversity of the shore of Ugljan that gives safe anchorage and docking in many small places, seafarers are often guests of Ugljan. There are several bays suitable for anchoring, of which the most suitable is Muline cove.

Muline is a harbour situated on the northwest coast of the island of Ugljan. In the 1st century, the Romans used this harbour for docking their ships. They loaded their ships with wine and oil produced in the Muline oil refinery. Today, the harbour serves as a safe place for sailors. 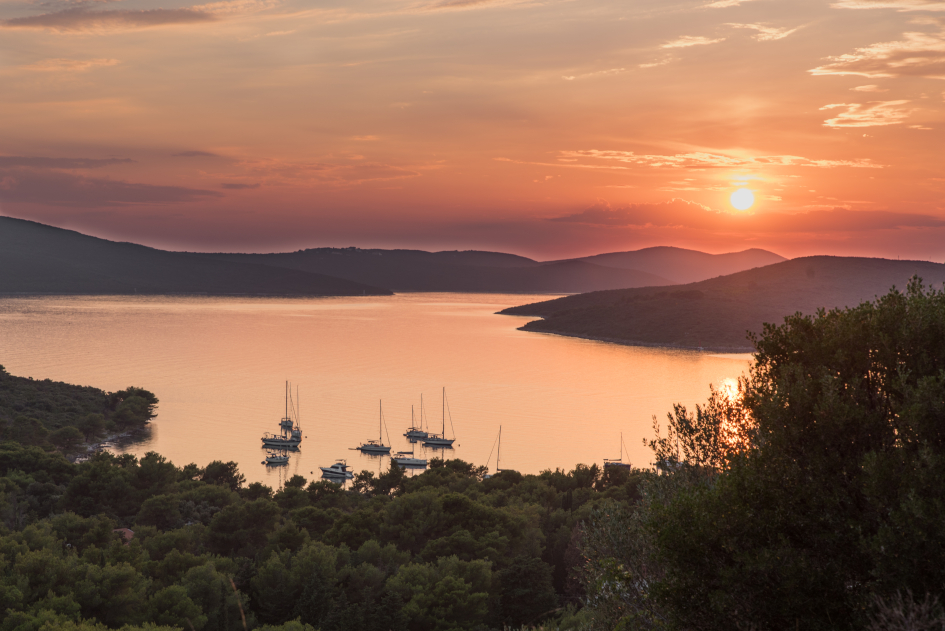